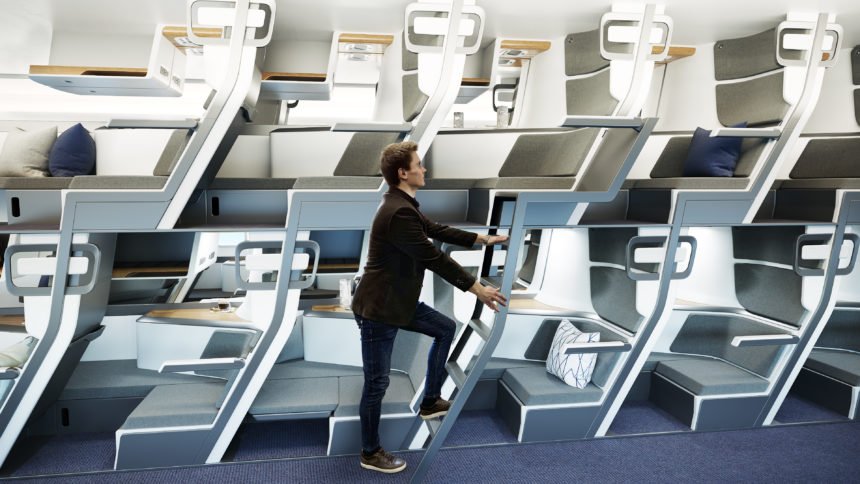 A design that reconfigures airplane cabins with double-decker lie-flat seats in premium economy is being touted as a possible solution for fliers looking for more protection from the spread of Covid-19.

Zephyr Seat is the vision of designer Jeffrey O’Neill, who reckons the isolation from fellow passengers that his creation will offer could be a game changer in the wake of the pandemic.

“We believe that new types of travelers will require privacy or will want to pay extra for that as much as they would pay for the ability to sleep,” O’Neill, the founder and CEO of start-up Zephyr Aerospace, tells CNN Travel.

With Zephyr Seat, airlines could provide double-decker seating in a 2-4-2 configuration which, O’Neill says, would allow the majority of global airlines to maintain the same seating density as offered by their existing premium economy cabins.

O’Neill was inspired by a sleepless flight between New York to Singapore a few years ago, on board what was then the world’s longest commercial flight.

Seated in premium economy,O’Neill realized halfway through the super long-haul journey that he wasn’t going to get any shut eye.

“I’m on probably the best rated airline in the world, and I’m getting wonderful service and the food is edible, but I can’t sleep,” he recalls. “This is really uncomfortable. Why is it so difficult to find an affordable way to lie flat on a flight that’s 19 hours?”

Real estate on an airplane is expensive — and airlines usually don’t want to sacrifice space.

But O’Neill found himself remembering a long-distance bus journey he’d made on a trip through Argentina. The bus utilized bunk beds, and he’d slept far better than on his ostensibly more luxurious air journey to Singapore. It occurred to him that maybe that was the solution.

This was two years ago, and O’Neill says his idea’s since graduated from a back of a napkin drawing he dreamed up with his design partner, to a life-size mockup, which he says proves its feasibility.

Zephyr’s double-decker concept utilizes the space that exists between a standard seat and an overhead bin.

“We basically retrofitted a whole other seat on top of another,” explains O’Neill. “So it’s essentially two levels, it’s not as tall off the ground as people might imagine, it’s only four and a half feet off the ground from the entry point to the lower seat to the upper seat.”

The result, O’Neill says, is more passenger leg room without the airline being forced to sacrifice space or reduce passenger headcount.

The idea’s still in its infancy, although O’Neill says he’s identified an engineering partner — and he’s been in conversation with four major airlines, including US carrier Delta, although there are no firm commitments right now.

He presented the idea to airline executives at the 2019 Airline Interiors Expo at Hamburg, Germany — and said got some valuable feedback on how to make the seat a feasible option for the mid-range aviation market.

The next stage would be passing the product through the required safety tests, which could be a three-year process.

Of course, a question mark currently hangs over aviation’s future, with no one quite knowing what air travel is going to look like over the next few months, let alone years.

There will likely be a greater demand for on board social distancing, from both passengers and airlines — recent flights have proven that current inflight set ups make this tricky.

O’Neill reckons that the new aviation landscape fits with his vision for Zephyr Seat.

The increased privacy the seat would offer, he says, could reassure travelers demanding on board social distancing. That said, the concept, like other ideas in the pipeline, doesn’t totally solve the issue of being in close proximity on aircraft and the potential Covid risk.

O’Neill also points towards a future where there could likely be fewer scheduled flights and those that are operating could be busier and more expensive — something we’re already seeing happen.

“The price for a business class or first class seat is going to be out of range for probably about 85% of all travelers, which means a more affordable option might become a reality or a consideration for a lot of those people,” he says.