In the midst of protests and destruction around the nation, a moving scene unfolded Sunday in New York when some of the city’s police officers knelt with protesters.

Aleeia Abraham shot a video of the officers taking a knee during a march in Queens calling for justice for George Floyd, who died while being arrested in Minneapolis, and in protest of the senseless killings of other black people.

In the video, the protesters are kneeling and you can hear the crowd’s surprise when some of the officers take a knee as well.

As they knelt, one protester reeled off the names of other black people who had died, including Trayvon Martin and Ahmaud Arbery.

Even as cities around the country have been rocked for days by violent protests, similar heartening scenes emerged over the weekend. In Florida Saturday, several officers from various agencies knelt with protesters in prayer in front of Coral Gables City Hall.

In Michigan, Genesee County Sheriff Chris Swanson walked with protesters after they chanted “walk with us!”

“Let’s go, let’s go,” Swanson said as he and the cheering crowd proceeded. “Where do you want to walk? We’ll walk all night.”

Abraham, who runs an organization called The BlaQue Resource Network in Queens, said she’d never seen police do that in all her years of activism, or even on television at other protests.

“That’s great, it’s a good sign, but what we’re really looking for is action,” she said.

“I’ll be even more impressed when we’re not stepped on and gunned down. That’s the moment I’m looking for.”

The NYPD’s 103rd Precinct is near where the march was held in the Jamaica neighborhood of Queens, so police knew about it in advance and were there.

A pastor invited the officers to come into the circle of protesters to kneel with them, which was greeted with cheers from the crowd.

All of the officers didn’t kneel, Abraham said.

Abraham said it was very nice of those officers who did kneel, but it was only a start.

“I really want to be clear that that’s not enough. It’s a nice start, but it’s nowhere near enough,” she said. 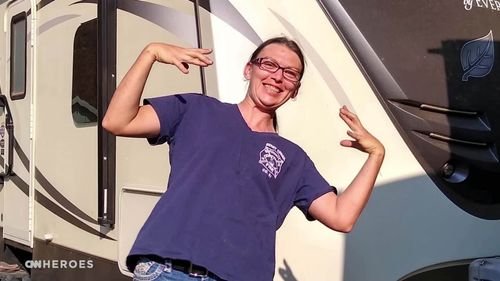