The coronavirus pandemic could have been a moment of glory for the world’s populist leaders. This is a period of heightened fear and anxiety — emotions that typically allow them to thrive.

Instead, some populists are finding themselves powerless against the outbreaks ravaging their countries. The US, Brazil and Russia now have the highest number of coronavirus cases in the world, and as their death tolls continue to rise, their economies are taking devastating blows.

Much to their frustration, the macho leaders of these countries are finding the virus immune to their playbooks. Intimidation, fear-mongering and propaganda just aren’t working. Being guided by science, communicating transparently and long-term planning are proving the sharper tools.

US President Donald Trump has turned to a favorite weapon, Twitter, to try to place blame for his country’s situation on China, tout unproven drugs and pressure governors to reopen states. But his blustering tweets and attempts to intimidate haven’t stopped the virus.

Russian President Vladimir Putin has pulled his usual PR stunts to project the image of a leader in control, but the country’s spiraling infection numbers show the virus has eluded his grasp. Brazilian President Jair Bolsonaro’s false message that the virus is “a little flu” that poses no real threat is falling flat, as cases now rise by as many as 20,000 a day. Brazil hasn’t even reached its projected peak.

Trump, Bolsonaro and Putin all initially downplayed the risk of the coronavirus, experts say, even as they watched it overwhelm nations like Italy. Now, they are scrambling to appear in control, as the virus keeps transmitting and killing, exposing their weaknesses.

Keep calm and carry on

The denial of the coronavirus as a threat by the presidents in the US and Brazil inevitably led to foot-dragging in their governments. The consequences are serious — models are now emerging that show how swift action can save lives. A Columbia University model, for example, shows that if the US had imposed social distancing one week before authorities called for it, 36,000 lives could have been saved. The US’ death toll is now more than 100,000.

Like Bolsonaro, Trump continually dismissed the virus as similar to the flu, and repeatedly assured Americans that things were “under control” in the early months of the year. When it became clear they weren’t, Trump still signaled that everything would be OK.

“This was unexpected. … And it hit the world. And we’re prepared, and we’re doing a great job with it. And it will go away. Just stay calm. It will go away,” he said on March 10, as the number of US cases approached 1,000.

While the US imposed some travel restrictions early, beginning with banning flights to and from China from February 2, the US Centers for Disease Control and Prevention only issued its first social distancing guidance on March 15. Just six weeks later, the country surpassed 1 million infections.“Downplaying the virus was in defiance of all the evidence that we had from China, and then European nations, about what the effects could be. It unquestionably contributed to a weaker public health response. It has been left to local leaders to pick up the slack,” William Hanage, an epidemiologist from Harvard University, told CNN.

In Brazil, Bolsonaro not only implied that the virus would never be able to hurt him, he made similar claims about Brazilians in general.

“Brazilians should be studied, we don’t catch anything. You see people jumping in sewage, diving in it and nothing happens to them,” Bolsonaro said on March 26, as the number of cases in his country approached 3,000.

While Brazil took some early action, banning travelers from several affected countries and closing land borders, Bolsonaro has never supported closing businesses and schools and his government never issued any clear guidelines for states on how to implement social distancing.

In fact, the President has repeatedly undermined local leaders’ restrictions, even joining regular anti-lockdown rallies, often without a mask, shaking hands with people and hugging children.

“In terms of the response, he continues to deny the importance of the virus, he insists on still dismissing it — there has been no change in tone over time,” said Francisca Costa Reis, a doctoral researcher focusing on Brazil at the Leuven Centre for Global Governance Studies in Brussels.

“At least the President of the US now recognizes this is some sort of an issue or a problem. I don’t think Bolsonaro has really responded at all.”

And like Trump, Bolsonaro’s lax attitude toward the virus has caused rifts and chaos within his government. In April, he fired his health minister, Luiz Henrique Mandetta, one of Brazil’s biggest proponents of social distancing. A second health minister, Nelson Teich, recently quit, after criticizing Bolsonaro’s decree ordering beauty salons and gyms to reopen.

The President has since appointed a military general with no background in medicine or public health, Eduardo Pazuello, as an interim health minister to lead the response.

‘Everything is under control’

The story is a little different in Russia. The government there wasn’t particularly slow to act. It closed its border with China on January 30, the day before even reporting its first two infections, and announced its lockdown measures when it had was reporting less than 700 infections.

But there were mistakes. Russia missed a number of infections coming into the country from Italy and other parts of western Europe, and it has failed to stop its hospitals from becoming hotbeds for the virus. Poor messaging has also undone some of the gains from early interventions.

In the early stages of Russia’s outbreak, Putin told his people the situation was “under control,” and back then, it seemed it was. Russia enjoyed the whole month of February without reporting a single new infection, although questions have been raised over whether the country was dismissing some coronavirus cases as pneumonia. It wasn’t until March 2 that its two cases officially became three.

Putin’s language has been more measured than Trump’s and Bolsonaro’s. He regularly calls for caution, he describes the virus as a real threat, and he doesn’t deny the scientific facts of the virus. But he has stuck to his old tactics, which are beginning to backfire.

In late March, he visited a newly built hospital to respond to the virus, wearing a yellow hazmat suit, in a typically Putinesque PR stunt that was supposed to show an unruffled leader touring part of a well-operating health system.

But the visit gave Russians little confidence. He was also photographed without his hazmat suit off, shaking hands with the hospital’s head doctor, who later tested positive for the virus. It only raised speculation that the President had been infected, and that he was self-isolating, as he gave weekly addresses via videoconference from his home.

It’s a suggestion the Kremlin has vehemently denied, with one spokesperson having to reportedly tell journalists that no, Putin was not hiding “in some bunker.” Either way, the whole affair ran counter to the strongman image Putin likes to project.

Putin’s visit also sat at odds with reports that soon followed of the dire situation in Russia’s hospitals. Many are overcrowded, and their staff are overworked and lack protective equipment. A viral video of nurses hooked up to drips in a hospital storage room in the city of Derbent in early May was a sign of just how bad things had become.

Many of Putin’s problems are of his own making. Russia was expected to vote in a referendum that could have cemented Putin’s power until 2036, and some of his decisions appear to be aimed at securing victory in that poll, observers say.

The vote has been postponed by the virus, a change that has taken some of the wind out of Putin’s sails.

But the vote is still on the horizon, and the President appears to be trying to distance himself from the crisis in the meantime, delegating the enforcement and easing of lockdowns to local leaders.

There are good arguments for devolving powers to the regions, but amid the successes have been failures. Putin announced extra money for frontline medical staff, for example, but it simply hasn’t reached everyone who were supposed to receive it.

He has tried to put a positive spin on his addresses to the nation, in late March announcing a week of “paid holiday,” choosing not to use words like “restrictions” or “lockdown.” But that too has backfired.

Russians in Moscow were seen soon after having barbecues in parks, there was a rush to book holidays and many people headed out of the cities to their summer homes — all activities that only helped the virus spread further across the country.

This paid holiday —which in practice was a “lockdown”— was extended several times. Putin called for an end to it on May 12, and Moscow plans to ease restrictions further on Monday. But the timing seems a bit back to front. When restrictions were imposed, case numbers were rising by around 1,000 infections a day. They are now rising by about 10,000 daily and Russians are being told to get back to work.

“By delegating the crisis response to lower levels, and not being clear in his own messaging, Putin did leave people to devise their own solutions in ways they felt responded to what Putin probably wanted. That kind of experimentation can be good, but is also meant there were a lot of mistakes made,” said Sam Greene, director of the Russia Institute at King’s College London.

“In some areas, there is endemic corruption and dysfunction. You could have known they were going to drop the ball. Investment wasn’t going to get where it needed to get.”

The same kind of patchwork response is playing out in the US and Brazil, and while it makes sense for different states to deal with their outbreaks differently, governors have at times pleaded for help with resources, like tests and protective equipment, in a situation that begs for some centralized leadership.

German Chancellor Angela Merkel, for example, has shown that even where states or regions hold power, strong federal leadership can bring about a well-coordinated response. Her decisions have been made largely with the input of state leaders, and as a result, many measures, such as mandatory mask wearing, have been enforced by all states, and clear guidelines on lifting lockdowns are being widely adhered to.

While Germany’s response to the virus has been heavily based on science, Trump and Bolsonaro continue to deny it.

Just as Bolsonaro continues to show up at rallies, or as Putin shook hands with the head doctor at a hospital treating coronavirus patients, Trump has repeatedly refused to wear a mask in public. For many weeks at the start of the outbreak, he too said he would continue to shake hands, against expert health advice.

Both Trump and Bolsonaro have touted the drug hydroxychloroquine, despite no significant scientific evidence it is effective in preventing or treating the virus. Some trials have shown the drug to be harmful in people with heart disease. Trump even announced in earlier this month that he was taking it, though he has since stopped, saying he had finished a two-week course.

In Brazil, that attitude could have graver consequences. Bolsonaro has had his health ministry include hydroxychloroquine in its guidelines for hospitals to use as a treatment in mild coronavirus cases.

This shirking of scientific advice speaks to a misguided sense of invincibility often seen in autocratic leaders, according to the University of Amsterdam’s Alessandro Nai, who has co-authored a study on the personality traits of strongmen.

“Strongmen tend to couple high confidence in themselves with impulsivity, with a disregard for the consequences of their actions. This seems to set up a persona of the ‘invincible and fearless leader’ that can solve issues by sheer willpower,” he said.

Leaders in parts of the world who are succeeding through this crisis are showing that the answer is far more complex than that. 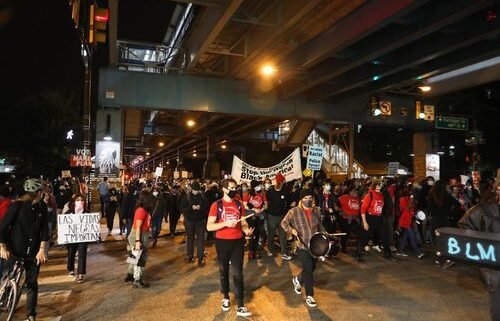