The US Supreme Court again ruled against President Trump, this time on his attempt to end the Deferred Action for Childhood Arrivals program.

The Supreme Court has blocked the Trump Administration’s attempt to end the Deferred Action for Childhood Arrivals program, known as DACA. It’s the Court’s second major blow to the President after the pro-LGBTQ rights ruling earlier this week. The 5-4 decision was written by Chief Justice John Roberts, who said the administration didn’t provide an adequate reason for ending the program. Roberts, a conservative, is now facing scathing criticism from top GOP lawmakers. The Trump Administration has long wanted to phase out the Obama-era program, which protects from deportation nearly 700,000 young undocumented immigrants who came to the United States as children. Lower courts have blocked it in the past, and now the Supreme Court has put a definitive end to current efforts — for now. Keep in mind, the ruling took issue with how the administration was trying to phase out DACA — it didn’t weigh in on the legality of the program itself. So, there’s no guarantee that future legal challenges would be met with the same result.

Coronavirus cases are ticking up across the country, bringing some states back to the table on mandatory safety precautions. In California, people now will be required to wear face masks in indoor public areas. Oregon has adopted a similar mandate for seven counties. North Carolina and Arizona are considering face mask regulations, too. These four states, plus six others, are reporting their highest seven-day averages of daily new coronavirus cases since the crisis began. The governors of two of those states, Florida and Texas, are blaming the spikes on increased testing, even though local leaders are pleading for more action. Cases are also rising in Oklahoma, where President Trump is set to hold a massive rally Saturday, much to the concern of medical experts. The ominous numbers are another sign that the pandemic isn’t going away anytime soon, something people half a world away in Beijing already know too well. The Chinese capital went 55 days without any new locally reported infections but is now battling a rapid resurgence.

The New York City Council has passed a sweeping package of police reform bills, some of which have been in the works since the death of Eric Garner, an unarmed black man, in 2014. The package includes requirements for officer badge numbers to be visible, an official ban on choke holds or any other maneuver that restricts blood or air flow, and a bill requiring oversight of the New York City Police Department’s surveillance technology. It also creates a penalty system for police officers with disciplinary issues, and sanctifies the right to record police interactions. In Washington, things aren’t progressing so quickly. Senate Democrats are trying to decide whether to block a Republican police reform bill they believe is too weak. If they don’t block it, they could miss an opportunity to change the bill to their liking. Meanwhile, Kentucky Attorney General Daniel Cameron has promised a thorough investigation into the death of Breonna Taylor, a black EMT who was shot by police in her home in March. Some believe her case has gone under the radar in the rapidly evolving push for police accountability.

Facebook has removed posts from President Trump’s re-election campaign for breaching its policies on hate by using what the tech company claims is Nazi imagery. The ads attacked what the Trump campaign described as “Dangerous MOBS of far-left groups,” and featured an upside-down triangle. According to the Anti-Defamation League, the symbol is almost identical to one used by Nazis to classify prisoners in concentration camps. In response, the Trump campaign claimed the symbol was widely used by antifa, a loose group of liberal activists and a favorite political target of the President. Just last month, Facebook CEO Mark Zuckerberg was criticized for not taking action on some of President Trump’s posts that had been flagged on Twitter as glorifying violence.

Europe is vowing to move ahead with levies that could hit big tech companies after the US slammed the brakes on diplomatic negotiations over global corporate tax rules. Since those talks shuttered, major European economies like France and the UK may move forward with their own levies to capture more taxes from companies like Apple, Google and Facebook. If that happens, the US has vowed to hit back with tariffs. This brewing conflict could heap even more pain on struggling economies. The UK is already facing its worst downturn in 300 years, and The Bank of England is adding even more money to the trillions in stimulus funds already propping up the economy.

A woman fends off a bear attack — with a laptop

Don’t try this at home.

McDonald’s is hiring 260,000 people in the US this summer

A golden opportunity for the golden arches.

Yes, she’s the one who got her start in “Twilight.”

Football may not even happen this year, according to Dr. Fauci

Now it will just be called Sunday Night SADNESS.

Americans are currently beset with record levels of unhappiness

You know what would fix this? Football.

That’s how many doses of hydroxychloroquine the federal government is stuck with now that the US Food and Drug Administration has revoked permission for the drug to be distributed to treat coronavirus patients. The government started stocking up on the drug after President Trump touted it as “very encouraging” and “very powerful” and a “game-changer.”

“We won’t allow our technology to be used in any manner that puts people’s fundamental rights at risk.”

Microsoft President Brad Smith, who said during an interview with Politico that the company does not sell facial recognition technology to US police departments or federal law enforcement. Smith also urged lawmakers to develop federal regulations for such tools.

Travel to a place of pure imagination: The Miniatur Wunderland in Hamburg, Germany, which is the biggest, most intricate tiny town you’ll ever see. (Click here to view) 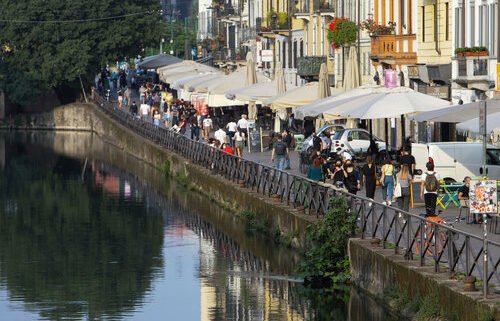