LAS VEGAS (KVVU) — More than 17,000 rare Nevada wildflowers were destroyed after someone dug them up, officials from the Center for Biological Diversity said.

According to a news release, conservationists discovered over the weekend that someone had dug up and destroyed more than 17,000 Tiehm’s buckwheat plants.

The plants, according to the news release, are a rare Nevada wildflower that the U.S. Fish and Wildlife Service said this summer may warrant protection under the Endangered Species Act.

As much as 40% of the flower’s global population, which exists on just 21 acres in western Nevada, may have been destroyed, the release said.

“This is an absolute tragedy,” said Patrick Donnelly, Nevada state director at the Center for Biological Diversity. “Tiehm’s buckwheat is one of the beautiful gems of Nevada’s biodiversity and some monster destroyed thousands of these irreplaceable flowering plants.”

A routine visit to the site by Center staff revealed substantial impacts to all six subpopulations of the flower, with some subpopulations nearly wiped out.

Officials from the Center for Biological Diversity say that plants were dug up or mangled with shovels, with taproots cut and most of the dead buckwheats hauled off-site.

This spring, according to the release, Ioneer Corp.’s biological consulting firm placed a “missing” poster for the buckwheat at the general store in the nearby town of Dyer, offering a $5,000 reward to anyone who locates a new population of the rare flower.

“After a whistleblower revealed mismanagement of the species by the Bureau of Land Management, the Center submitted an emergency petition to protect the plant under the Endangered Species Act in 2019. In response the Fish and Wildlife Service said in July the plant’s protection “may be warranted” and initiated a year-long review.”

After the initial discovery of the incident, a field survey conducted by Donnelly and Dr. Naomi Fraga, director of conservation at the California Botanic Garden, revealed approximately 40% mortality to the species across all subpopulations, due to removal or destruction, the release notes.

“This appears to have been a premeditated, somewhat organized, large-scale operation aimed at wiping out one of the rarest plants on Earth, one that was already in the pipeline for protection,” said Donnelly. “It’s despicable and heartless.”

Fraga and Donnelly sent a letter Tuesday to the BLM, U.S. Fish and Wildlife Service, Nevada Division of Forestry and Ioneer Corp. in which they made a series of recommendations to the agencies including: fencing the site, 24-hour security, immediate stabilization and rehabilitation of affected plants, and immediate termination of any monetary rewards, including Ioneer’s, for finding Tiehm’s buckwheat.

“I was absolutely devastated when I discovered this annihilation of these beautiful little wildflowers,” said Donnelly. “But we’re not going to let this stop our fight against extinction. We’ll fight for every single buckwheat.” 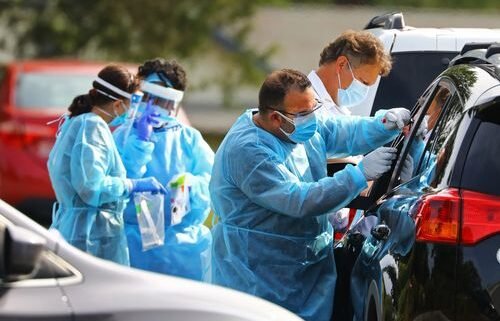