New York (WCBS) — Tension was high Wednesday night at a Staten Island bar, where patrons protested after a manager was arrested the night before for refusing to comply with the state’s orange zone restrictions.

As CBS2’s Natalie Duddridge reported, officers were guarding the bar door all day, making sure people did not try to eat and drink inside.

The owner defied the rules, declaring his business an “autonomous zone,” marking those words on the sidewalk to try to protect himself from COVID lockdown rules.

But it didn’t work. He got slapped with more than a dozen summonses.

Owner Keith McAlarney, the owner of Mac’s Public House on Lincoln Avenue, showed up to his bar with his attorney Wednesday morning. It was shut down Tuesday night by the city’s Sheriffs Office, and the general manager, Daniel Presti, was taken into custody for allegedly obstructing governmental administration and led away in handcuffs for refusing to stop indoor dining in an orange zone after several warnings.

“I’m allowed to be inside my private property. I pay my rent,” McAlarney said. “They’re saying right now I can’t serve food and I can’t serve alcohol.”

The city is allowing him to serve takeout food and alcohol, and offer outdoor dining. He just can’t allow people to eat or drink inside, like all other restaurants in the designated orange zone.

“They were frustrated. They’re tired of it,” his attorney Louis Gelormino added.

“I actually support him. I believe that people should be allowed to earn a buck with their business,” a woman named Carol said. “I think that a lot of the hype is a little bit exaggerated.”

It’s not an exaggeration that hospitalizations have nearly doubled in the last month across the city.

“So many folks have been struggling to make ends meet and are feeling the challenges now as this second wave is bearing down on us, particularly concerned about so many of our small businesses,” Mayor Bill de Blasio said Wednesday.

The numbers show for the last several weeks, Staten Island’s infection rate has been among the highest in the city. An emergency field hospital, not used since the peak of the pandemic, reopened last week at Staten Island University Hospital.

A neighboring business owner wondered why everyone can’t come together to help slow the spread.

“Why can’t we just all be on one page?” grocery store owner Larry Tajudeen said.

Tajudeen watched in disbelief as several scuffles broke out throughout Wednesday afternoon as McAlarney tried to allow a few friends inside, including state Sen. Andrew Lanza. Officers said they had orders to only let the owner and attorney inside.

Lanza was not arrested. He said he showed up to ask for fairness. 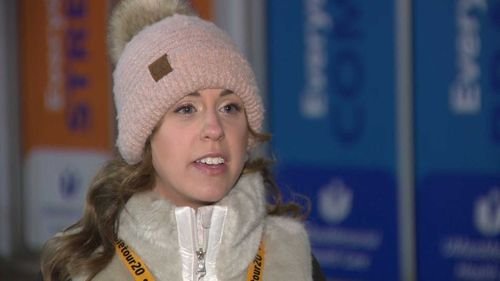