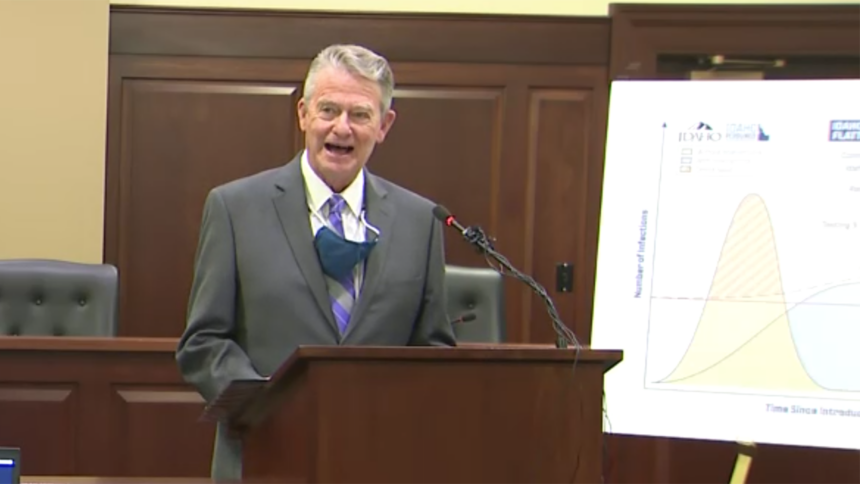 BOISE, Idaho (KIFI/KIDK) - Idaho will remain in the fourth and final stage of reopening the economy during the coronavirus pandemic for at least another two weeks, Gov. Brad Little said Thursday.

The Republican governor also said that Idaho will receive 530,000 rapid antigen tests that will be prioritized for schools. Officials said the tests take 15 minutes, are 95% accurate and use a less invasive nasal swab.

Little also announced the formation of a state COVID-19 Vaccine Advisory Committee in anticipation of a vaccine that would be distributed by the federal government, potentially by January or earlier. Little said he wants Idaho to be ready when a vaccine is available, and by mid-October state officials will submit a plan on how the state will distribute the vaccine.

An initial vaccine supply will likely be limited, said state epidemiologist Christine Hahn, and it will likely first go to health care workers and emergency responders.

Little since March has been trying to manage the pandemic to limit infections and deaths while also keeping the economy going until a vaccine is available.

"The availability of a safe and effective COVID vaccine is one of the biggest hurdles to getting back to normal," he said Thursday.

Little issued a stay-at-home order in late March that ended April 30. The state then successfully advanced at two-week intervals through the first three of Little's four-stage reopening plan. But the state remains stalled in stage 4, which was initially set to expire on June 27.

Little said virus infections and hospitalizations are too high to move out of stage 4. Stage 4 allows all businesses to open as well as gatherings of more than 50 people as long as distancing of 6 feet (2 meters) and other precautions are taken.

Local government entities through state law have the ability to put in place greater restrictions than put forward by Little. Eight of Idaho's 44 counties, along with nine cities, have mask requirements, according to the Idaho Office of Emergency Management. Little hasn't issued a statewide mask mandate, but he wears one in public.

Idaho's economy is among the best in the nation with a 4.2% unemployment rate. But Johns Hopkins University reports that Idaho has more than 42,000 infections and 469 deaths through Wednesday.

"I would love to have zero fatalities and zero cases, but it is somewhat of a balancing act, and what I have to do is lead by example and put adequate resources out there," Little said.

Hahn, the state epidemiologist, said the rapid antigen tests for schools will likely first go to teachers and staff, and be used on those experiencing an illness. But she also said the state has permission to use the tests for those who are feeling fine to expand the testing.

Little said more information on the Idaho COVID-19 Vaccine Advisory Committee and who will be on it will be made available at a later date. The committee's purpose is to advise the governor on prioritizing who gets the vaccine.

Hahn said that health care workers and, potentially, older adults who are more susceptible to dying if they get the virus could be high on the priority list. She said the vaccine is expected to be free.

The COVID-19 vaccine, when it becomes available, is likely to receive pushback from Idaho residents opposed to vaccines, including a number of state lawmakers.

"We will continue to try to address the concerns of anybody in Idaho, particularly about the safety, but also about the necessity (of the vaccine)," Little said.