Discovery has accused Poland of violating an international treaty by introducing new legislation the US company says amounts to an “assault” on media freedom and a direct attack on its business.

In a statement on Thursday, Discovery said it had notified the Polish government of its intent to take legal action under a 1994 bilateral investment treaty following the Polish parliament’s narrow approval of a controversial media bill that both the United States and Europe say threatens media freedom.

“The legislation is the latest assault on independent media and freedom of the press, and takes direct aim at Discovery’s TVN, the country’s leading independent broadcasting group and news provider, as well as one of the largest US investments in Poland,” the company said.

The bill will strengthen an existing ban on media companies operating outside Europe from controlling Polish broadcasters. It passed the lower house of the Polish parliament on Wednesday with 228 votes in favor, 216 against and 10 abstentions, and will now advance to the Senate.

TVN24 would be the main channel affected by the new legislation, as it is owned by Discovery via a subsidiary registered in the Netherlands. (Discovery is seeking to merge with CNN’s parent company WarnerMedia.)

The Polish government did not immediately respond to a request for comment on the company’s legal action. It claims the law will be used to block hostile foreign powers taking control of the country’s broadcasters.

Opponents say it is a clear attempt to silence TVN24, one of the few remaining independent TV channels in the country.

Secretary of State Antony Blinken said the United States was “deeply troubled” by the draft legislation.

“Large US commercial investments in Poland tie our prosperity together and enhance our collective security,” he said in a statement on Wednesday. “This draft legislation threatens media freedom and could undermine Poland’s strong investment climate.”

The management board of TVN appealed to Polish lawmakers and President Andrzej Duda to prevent the bill from becoming law.

“Poland’s future as a democratic country in the international arena and its credibility in the eyes of investors depend on this,” it said in a statement.

“The outcome should also be deeply concerning to any enterprise investing in Poland. Through this vote, Poland directly undermines the values that have connected Poland with Europe, uproots the foundation of the Polish-American relationship,” they continued.

Discovery said in an earlier statement Thursday that the Polish parliament had “opted to restrict the right of Polish viewers to choose and access reliable and independent information.” 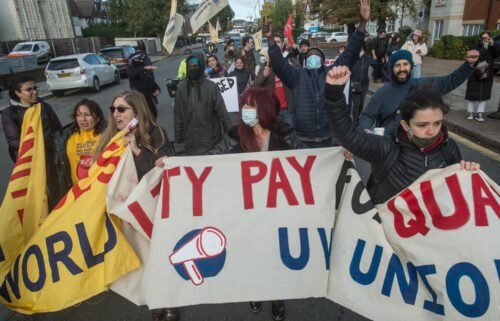