David Rubenstein is shrugging off fears of runaway inflation and concerns about looming tax hikes. The private equity billionaire is far more worried these days about the state of American democracy.

“We don’t have bipartisanship. We have enormous amounts of tension between the two parties,” Rubenstein, co-founder of the Carlyle Group, told CNN in an exclusive interview. “It’s not a good situation. I hope that we can fix it, but I don’t think it’s going to be fixed anytime soon.”

The investor and philanthropist views Covid-19 and the January 6 insurrection as two significant “stress tests” of American democracy — ones that have further divided the country. He said they join a list of other stress tests throughout history, including the Vietnam War and Watergate.

“We’ve had political divides before. Obviously the greatest one of them was the Civil War,” Rubenstein said during an interview on the sidelines of the SALT conference about finance, tech and geopolitics this week in Manhattan.

During Rubenstein’s time working on Capitol Hill and in the White House in the 1970s, politicians felt like they were great legislators if they proved they could work with people from the other side of the aisle, he said.

“Now, anybody who works with the opposite side is derided by their own party,” he added.

The political dysfunction is prolonging the battle over raising the debt ceiling, an “antiquated” mechanism that Rubenstein favors abolishing. The Treasury Department has said it will run out of cash and exhaust extraordinary measures next month unless the federal borrowing limit is raised.

Rubenstein, whose wealth Forbes pegs at $4.3 billion, interviewed historians, diplomats and musicians for his new book “The American Experiment: Dialogues on a Dream.” In the interview with CNN, he expressed frustration that dysfunctional politics has permeated America’s response to Covid.

“We’ve lost 650,000 Americans. Four million people have died globally because of Covid. At what point do we say, ‘Enough is enough’?” Rubenstein asked.

President Joe Biden announced plans to impose an emergency rule that would require employers with 100 or more workers to ensure their workforce is fully vaccinated, or submit negative Covid tests each week. Companies could face fines of up to $14,000 per violation.

Republican governors have blasted Biden’s vaccine mandate, with Mississippi Governor Tate Reeves describing the requirements as “clearly unconstitutional” and likening them to “tyranny.”

“I don’t see any alternative to what he did,” Rubenstein, said of Biden. “Clearly, people are playing to political audiences. Some people want credit for having come up with a vaccine relatively quickly, but they don’t want to have people take the vaccine. It’s a strange phenomenon.”

And even as another current debate rages over inflation, Rubenstein dismissed those concerns.

“There are bigger things to worry about than the monthly inflation rate,” he said.

Consumer prices have been in focus for investors: They rose in June and July at the fastest 12-month pace since 2008 before cooling a bit in August.

The price hikes have in some cases wiped out pay raises for workers. When adjusted for inflation, compensation is now lower than it was in December 2019, according to an analysis released in August by Harvard University’s Jason Furman.

However, Rubenstein expressed confidence that inflation will ease from these high levels, though it may stay above the Fed’s target for average inflation of about 2%.

“I don’t think the world will fall apart if we have 3% or 4% inflation. We’ve just gotten used to low inflation,” he said.

Rubenstein, non-executive chairman at Washington, DC-based Carlyle, pointed out that countries like Japan have tried and failed to create some inflation. And higher inflation should allow the Federal Reserve to lift interest rates out of the basement, giving it room to drop them lower again during the next recession.

“It will get us out of this artificially low interest rate environment we have now,” he said.

“There will be tax increases. There’s no doubt about it,” he said. “The reason is we need the revenue. And we don’t have the discipline to cut spending.”

‘He stood up to Trump’

Not surprisingly, Rubenstein said he thinks Biden should reappoint Federal Reserve Chairman Jerome Powell, whom the billionaire hired at Carlyle in the late 1990s.

In 2019, Trump compared Powell to a “golfer who can’t putt” and even suggested his handpicked Fed chief is a “bigger enemy” than Chinese President Xi Jinping.

“He was strong in not getting into a pissing battle with Trump. He stood up to Trump in many ways,” Rubenstein said.

Progressives have urged Biden to replace Powell with someone who would be tougher on Wall Street regulation and climate change. Even lifelong Republican Sheila Bair, the former chair of the FDIC, has argued the Powell-led Fed is too soft on big banks.

But Rubenstein is skeptical Biden will find someone to replace Powell who can get confirmed by a narrowly divided Senate.

“You’ve got the rare person who Democrats and Republicans generally respect,” Rubenstein said. 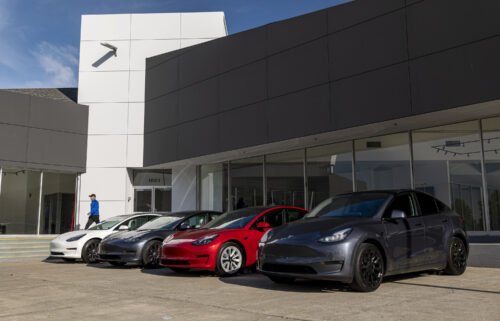