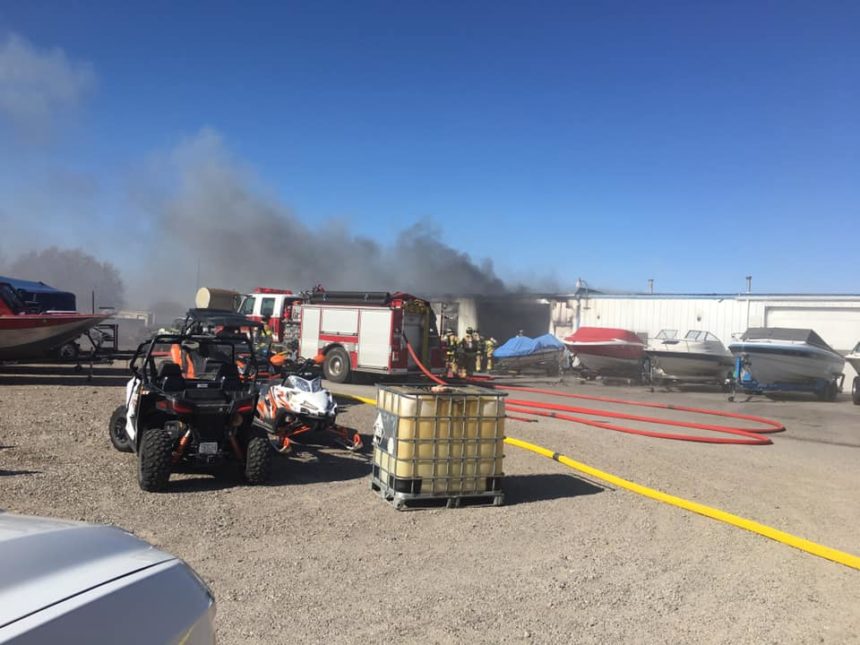 Idaho Falls Fire Department is currently battling a fire at a business in the 2000 block of Woodruff Ave.

Stay with Local News 8 and KIDK Eyewitness News 3 for updates to this developing story.

A portion of a Bonneville county business is completely destroyed after a fire early afternoon Sunday.

The Bonneville County Sheriff’s Office closed off Woodruff Avenue north of the intersection of Lincoln Road.

Intermountain Gas and Rocky Mountain Power were dispatched to turn off all utilities to the building.

It was reported there was nobody inside the building at the time of the fire.

Plumes of smoke could be seen from miles away.
Firefighters arrived at a scene of a single-story, large steel commercial building with flames and smoke came out of two bay doors.

The store's showroom is undamaged, but on the west side of the building, the service area is a total loss.

Among the losses in the fire were five boats, three forklifts, one UTV and multiple tools inside the service area.

It took firefighters several hours to fully contain the fire after many flare-ups.

There were no injuries and the fire is still under investigation.

"Firefighters were able to keep the fire from spreading to the showroom. Precision Boats had some storage rooms located outside of the facility that did not get damaged. Fire investigators are on the scene we don't know a cause right now," said Kerry Hammon, Idaho Falls Public Information Officer.

When the fire was nearly contained, the damage was estimated to be around $500,000.

The store owner received many calls from concerned boat owners who store their boats at Precision Boats. They'd like to emphasize that boats kept in the storage units were unaffected by the fire.