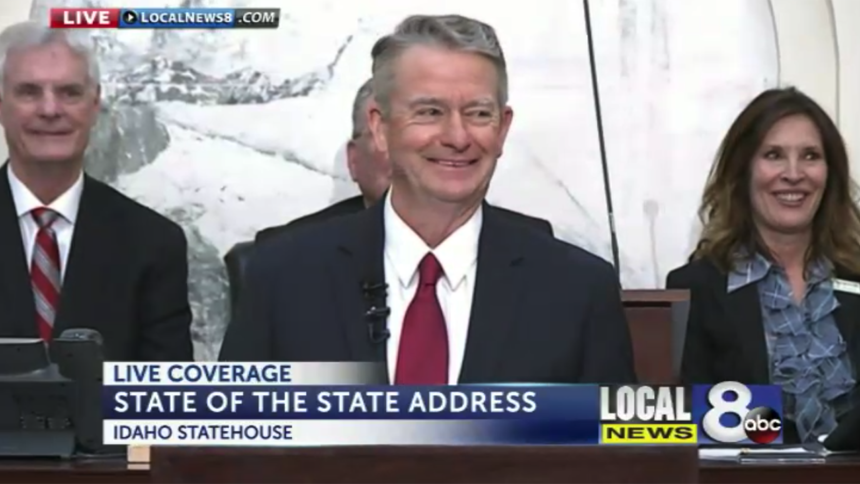 You can watch the address below.

Little opened his message by recognizing an important milestone. 2020 marks the 100th anniversary of women's voting rights. He called on Idahoans to acknowledge all women who have been elected, appointed or are serving across state government.

Little noted that Idaho will mobilize more than 4,000 of its Idaho Army National Guard soldiers to participate in a large-scale military readiness exercise in Germany this spring. More than 400 airmen will deploy to several locations throughout southwest Asia in support of American combat operations.

Legislatively, the governor said his goal would be to make the state "strong today and prepared for tomorrow."

"I am committed to working with you to invest in education, continue reducing regulatory burdens, and increase all Idahoans' prosperity and quality of life. I want us to champion affordable health care, make Idaho safer, and promote healthy lands and waters. I want Idahoans to be confident in their state government," Little said.

The governor said his first executive order will be a call for "zero-based regulation." That will start with 30 bills aimed at repealing outdated statutes.

He said his budget will limit spending growth to 3.75%.

The governor encouraged lawmakers to keep "our foot on the gas" in committing funds for literacy. New initiatives were outlined in a "Our Kids, Idaho's Future" task force in 2019.

But, Little said the state is putting too much reliance on property taxes to fund public schools. He said he would propose an additional $30 million in general fund appropriations to continue increasing teacher pay.

"Our efforts should elevate the profession and help us keep good teachers in Idaho classrooms," Little said.

Little is recommending $6 million in the capital budget for new career technical education programs at College of Eastern Idaho, Lewis-Clark State College, and the Department of Juvenile Corrections.

Little said his budget would implement Medicaid Expansion with a net-zero impact on the general fund.

Little also noted Idaho's amendment to the 1995 Cleanup agreement. He said the plan would bring groundbreaking research to the Idaho National Laboratory and high-tech jobs to eastern Idaho.

You can see the governor's full state-of-the-state message below.