Storm activity is thinning out as we begin the…

Last weekend it was Storm Ciara. Now it will be Storm Dennis.

A second weekend of significant windstorms is forecast for Europe and the British Isles and that could cause more problems for travelers.

Storm Ciara caused hundreds of flights across Europe to be canceled last weekend, with two of Europe’s busiest airports — Frankfurt, Germany, and Amsterdam, Netherlands — each grounding more than 100 flights due to the storm.

While this may seem like an excessive number of storms, it really isn’t. This is the exact time of year these big, intense systems normally hit Northern Europe.

So why all the attention, if this is the norm?

It’s not the frequency, but rather the intensity that has everyone taking notice.

According to Stephen Burt, a weather historian and fellow at the University of Reading, we had a similar cluster of intense storms crossing the Atlantic back in January and February of 2014.

The current system is worth watching because it will come close to the historical record for low pressure.

Most forecasts have had the pressure of this storm bottoming out at 918-921mb (millibars).

So, depending on where this storm bottoms out, it could end up in the top ten lowest pressure storms in North Atlantic recorded history.

Winds will not likely reach the 90 mph-plus gusts seen with last weekend’s storm, but widespread gusts of 50 mph are likely across the UK both Saturday and Sunday. High winds are possible on Sunday in Belgium, Denmark, France and Germany.

The winds won’t be the only concern. Saturated ground presents the risk for further flooding. The UK Met Office has already issued multiple Amber Warnings for heavy rainfall.

Rainfall amounts of 2-3 inches (50-75mm) are likely across a widespread area of the region, with isolated amounts of 5+ inches (125+mm) possible.

Read more weather news from around the world

What is a bomb cyclone? 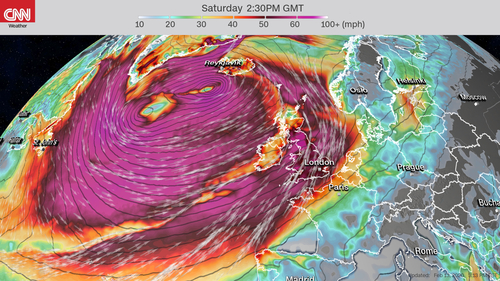