Idaho State troopers and Idaho Falls Police officers were out enforcing crosswalks Thursday morning in Idaho Falls with a little help from T-Rex and Ant-Man.

Although fatalities from traffic accidents in the US are going down, safety for pedestrians and cyclists is not keeping up.

The report says these declines may be due to better technology in newer cars. But it’s a stark contrast to the numbers surrounding pedestrian and cyclist deaths, which have both seen an increase since 2017.

Pedestrians saw 208 more fatalities in 2018 than the previous year — an increase of 3.4%. Cyclists, meanwhile, saw a 6.3% increase, with 51 more fatalities, according to the report.

“We should not lose anyone just trying to get places,” she told CNN. “People’s lives are out there on the line every day, unnecessarily.”

The report comes just a few months after the nonprofit Governors Highway Safety Association declared 2018 the deadliest year for pedestrians in three decades.

But Serna said these numbers don’t excuse the damage done. Well-lit streets are an obvious fix, and victims shouldn’t be blamed for getting injured or killed, she said.

“No one decision that a person makes should lead to them losing their lives,” she said. “People aren’t perfect.”

But she said cities should make conditions safer for those walking or otherwise not in vehicles — by imposing lower speed limits, for example.

“Let’s make that crash happen at a low enough speed so that no one dies,” she said.

And lowering speed limits is just one way to improve safety, Serna said. Others include adding concrete islands, giving pedestrians a few seconds head start for crossing streets (so they don’t get hit by turning cars), and more blinking-light crosswalks (as opposed to just painted lines). 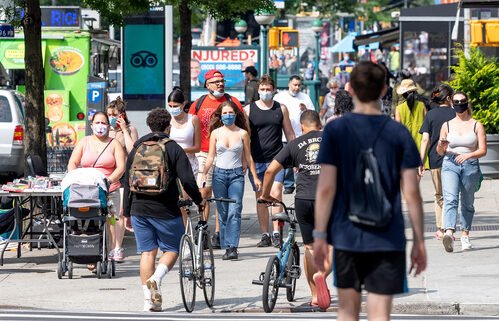