Former President Donald Trump still wants a wall on the southern border. And he said it’s Democrats’ fault it hasn’t happened yet.

On this wet, humid Wednesday on the South Texas border, Trump met with Texas Gov. Greg Abbott, Texas Lt. Gov. Dan Patrick and more than 20 House Republicans and local border officials to discuss efforts to build a wall, an echo of years and campaigns past. The visit served Trump a public space to vent his frustrations, and served as an act of loyalty of sorts for the Republicans clustered around him. It also highlighted Republicans’ desire to push immigration to the forefront amid the ongoing border crisis.

Trump flew into the Rio Grande Valley in the morning and sat next to Abbott for a roundtable with Republicans and Texas leaders on efforts to build the wall. He mostly stayed on message during his remarks at the roundtable, touting his administration’s immigration policies, such as building the border wall and his “Remain in Mexico” policy. But moments of his past frustrations, including the Russia investigation and his loss in the 2020 presidential election, also popped up during his remarks.

Along with the Texas GOP leaders, more than 20 House Republicans traveled to South Texas to participate in the border visit with the former President to make clear they still stand with him, with a handful even not participating in the vote on legislation to create a select committee to investigate the January 6 insurrection.

Before the meeting with Trump on Wednesday, the majority of House Republicans arrived at McAllen, Texas, on Tuesday night and visited part of the porous border wall on a tour led by Rep. Jim Banks of Indiana, the chairman of the Republican Study Committee.

One by one, the House Republicans took turns taking photos and doing livestream interviews with conservative media at an open spot of the border wall near La Joya at midnight Tuesday. Some migrants, mostly young women and children, could be seen walking to turn themselves in to Border Patrol agents near the wall. Conservative Rep. Lauren Boebert of Colorado, translated by a conservative media reporter who spoke Spanish, spoke to women about why they were crossing into the United States and where they originally came from.

It’s clear Republicans see the issue on the border as a major talking point ahead of the midterm elections, with hopes to regain control of the House. And Trump is going to help them.

The surrounding area of McAllen, made up of four counties in Texas and populated by more than 1 million people who identify predominantly as Hispanic, has seen a dramatic shift in politics in the last year.

Republicans came closer than in previous decades to winning a House seat in the district in the 2020 election, giving the party hope they can turn the area red.

Democrats in the area and across the country are baffled by the switch. They wonder what’s driving voters to lean Republican when the area has been staunchly Democrat for decades.

The shift became clear when Democratic Rep. Vicente Gonzalez came within 4 points of losing his seat to the Republican candidate, Monica De La Cruz-Hernandez, who is again challenging him in the 2022 election.

The National Republican Congressional Committee, the campaign arm for House Republicans, is targeting a handful of vulnerable Democrats, including Gonzalez.

“Democrats’ policies have created a crisis along the border, caused the price of everyday goods to skyrocket, and pursued a damaging socialist agenda that threatens Texas families. The McAllen mayor’s race was the canary in the coal mine for Vicente Gonzalez, who is doomed in 2022,” Michael McAdams, spokesperson for the National Republican Congressional Committee, told CNN in a statement.

Another Democratic congressman who represents a district in the area, Filemon Vela, announced earlier this year he would not run for reelection after he won his last race by 55% in November.

A spokesperson for the Democratic Congressional Campaign Committee, House Democrats’ campaign arm, told CNN they are committed to helping Gonzalez.

“Not a single Republican can take credit for the economic comeback that is creating jobs and boosting business across Texas right now, and voters will remember,” said spokesperson Monica Robinson. “With a toxic brand like that, winning seats in South Texas is nothing more than a Republican pipe dream. Democrats are focused on the issues Texans care about, and we’re investing earlier than ever to deliver that message door-to-door and mobilize our voters across South Texas.”

Most notable is the new McAllen mayor, Javier Villalobos, a Republican who was praised by Republican state and national lawmakers and voices for becoming the first GOP mayor in the city in recent history, even though the race was a nonpartisan election.

Gonzalez slammed Trump’s visit with Abbott in a statement, arguing that he’s dividing the border community.

“Inviting the former President, who incited the January 6th insurrection in an effort to overthrow the government and prevent the peaceful transition of power, is nothing short of a slap in the face to South Texans,” Gonzalez said. “Instead of coming down to try and divide people by misrepresenting the border community on the national stage, I urge the Governor to work together to enact meaningful policy solutions that will bring real border security.”

This shift is not lost on Trump, who referenced Vice President Kamala Harris’ visit to El Paso last week, a border city that’s more than 750 miles away.

“We’re going to the real border with real problems, not a part where you look around and don’t see anything,” Trump said, referencing GOP criticism of Harris’ visit.

The Biden administration appointed Harris to lead diplomatic efforts with the Northern Triangle, amid an influx of unaccompanied migrant children crossing the US-Mexico border. She visited El Paso to see a migrant processing center, after increased criticism for not having visited the US-Mexico border and a rocky first foreign trip to Guatemala and Mexico earlier this month.

A record number of unaccompanied children crossed into the US this spring, further intensifying GOP criticism of the Biden administration’s handling of border issues. US Customs and Border Protection encountered more than 180,000 migrants at the southern border in May, putting the US on track to surpass the number of border crossings in fiscal year 2019. Homeland Security Secretary Alejandro Mayorkas said Friday that the administration has made “extraordinary progress” in dealing with the situation at the border since March.

“Donald Trump and Republicans are bringing their clown show on the road in a desperate attempt to try to spin their cruel border policies to mislead voters. For four years, Republicans were silent as Trump sabotaged our immigration system and threw it into chaos. If Republicans were serious about addressing issues at the border, they’d join President Biden and Democrats in working to clean up the mess they left behind, create a safe and humane immigration system, and finally pass immigration reform. Anything less is political theatre,” DNC spokesperson Ammar Moussa said in a statement to CNN.

Select committee vote in the House

Meanwhile, more than 1,700 miles away, as Trump was speaking about the border in a choreographed event by a section of unfinished border wall, the House passed a resolution to create a select committee to investigate the January 6 insurrection after efforts for a bipartisan panel to investigate the events of the day failed in the Senate.

Out of the more than two dozen House Republicans who made the border visit, only a handful submitted proxy votes on creation of the select committee — a move meant to be used only for reasons related to the Covid-19 pandemic.

If there’s any indication, however, of where the Republican Party stands on the Capitol attack, this moment was one of them.

At the end of the event, CNN’s Jim Acosta asked Trump whether he should apologize for the January 6 insurrection as he exited the riser after his remarks.

The audience, filled with House Republicans and other Trump allies, booed in response and didn’t let Trump respond.

CNN’s Jim Acosta and Alexander Hunter contributed to this report. 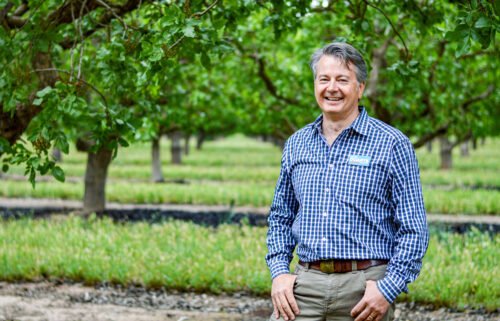 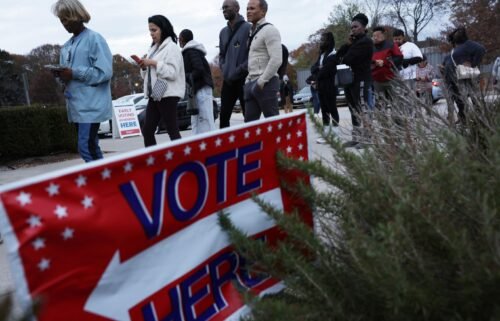 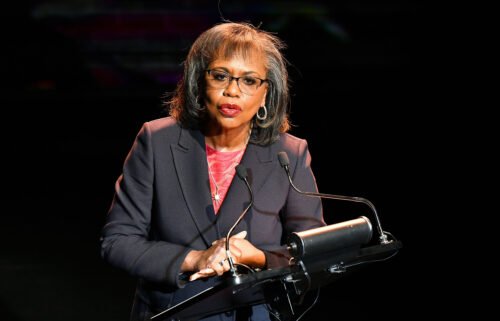