As Russian pressure increases in the strategically key eastern Ukraine city where two-thirds of properties have been reported as destroyed, an international football match in the Scottish city would seem somewhat irrelevant.

Ukrainian Taras Berezovets, who worked as a political analyst before the Russian invasion started on February 24 but has since joined Ukraine’s special forces, would disagree.

Like many other of his ‘brothers in arms’ — given football has always been the number one sport in Ukraine — Berezovets will be doing his best to keep across developments in his country’s World Cup playoff against Scotland on Wednesday.

If Ukraine does get past Scotland at Hampden Park and then beats Wales in Cardiff on Sunday, the country will have remarkably secured qualification for the World Cup in Qatar later this year.

According to Berezovets, work is underway to find a broadcast of the match. But even if that’s impossible for those on the front line, he says those fighting will still gather together and listen on the radio if they can.

“When the football team is playing, the whole country is watching. Football is the number one sport in Ukraine, it’s extremely popular,” Berezovets told CNN Sport over the phone from the country’s embattled south.

“Especially during the wartime, I think all the country will be supporting our national team. People are looking forward to this match against Scotland. The importance of this match is very high and especially for the armed forces.

“This would be a crucial moment and especially for the army. It would be very important for our spirit during these hard times.”

Coping with the pressure

Such expectation and support might seem a heavy burden on the Ukrainian players, but the team seems to be using it as extra motivation.

A day before kickoff in Scotland, the players and staff were milling around their hotel in Glasgow; sliders on, coffee in hand.

It’s a stark contrast from the realities back in Ukraine and it’s an uncomfortable feeling for some of the squad.

As if to underline the different realities, the match in Scotland kicks off when curfew begins in some regions of Ukraine.

But while things look calm on the surface, it’s hard to imagine the thoughts that must be running through the players’ heads — all of whom have watched the horrific scenes that have unfolded in their homeland.

Many still have family in Ukraine but have been urged to compete by the Ukrainian government in order to represent the country on the global stage, a powerful symbol for a country under attack.

“It’s a plus and minus. It doubles your motivation but makes you think you have no right to make a mistake,” Oleksandr Glyvynskyy, the Ukrainian team’s media representative, told CNN Sport from the team’s hotel in Glasgow.

“It’s more important to be winning in your country, to achieve the biggest victory of independence, but football is important of course.

Given that staying in Ukraine was too dangerous, the squad have been based at a training camp in Slovenia since May 1.

First to arrive were the four players still living in Ukraine, along with many of the backroom staff. Many will return to the country after their duties are finished with the national team.

Players from Ukrainian clubs Shakhtar Donetsk and Dynamo Kyiv, who had been playing in exhibition friendlies around Europe, were next to join before those playing across Europe’s other leagues arrived following the conclusion of their domestic seasons.

Goalkeeper Andriy Lunin was last to join the team on Monday after being an unused substitute in Real Madrid’s win over Liverpool in the Champions League final.

“The conditions [in Slovenia] were very good. The people were very kind, they supported us a lot,” Glyvynskyy said.

“The facilities were perfect. The surroundings were terrific because there were mountains and a park, so the landscape was like a fairytale.

“But it’s not easy when you’re not at home. We’d all like to be at home, but on the other hand, we know they wouldn’t be safe.”

Despite this, coaches were happy with the hard work put in by the players and the team is confident of causing Scotland problems.

“The mood is okay. Every day we have the news, they speak with their relatives, but […] the players are professionals. They know they need to focus on the match,” Glyvynskyy added.

“The expectations are very high in Ukraine so they want with all their hearts to make this a big achievement for Ukraine to raise the spirit in the country.”

In an emotional news conference on Tuesday evening, Ukraine’s star player Oleksandr Zinchenko was tearful when asked to reflect on the past weeks but said the team was in a “fighting mood.”

“It is impossible to describe these feelings if you’re not in this position. The things that are happening now in our country are not acceptable. It’s something that I can’t even describe,” he told reporters.

“That’s why we need to stop this aggression. We need to win. Ukraine is a country of freedom. Ukraine is never going to give up.”

Ukrainian players made up the majority of the Soviet Union teams before its breakup in 1991 and club sides Dynamo Kyiv and Shakhtar Donetsk have consistently punched above their weight in European football’s major competitions.

“In critical moments of our history, football was the game which gave spirit to many Ukrainians,” Berezovets said, noting Russia’s annexation of Crimea in 2014 as another occasion when the national team gave Ukraine hope by playing international matches.

Those heroes of the past have inspired the current generation to provide some light in the darkest of times but no one is expecting a soft touch from their opponent on Wednesday.

Scotland captain Andy Robertson says his team are as determined to get to a World Cup and needs to forget the backdrop during the match.

“We have huge sympathy for the people of Ukraine, of course we do,” Robertson told reporters.

“I think it’s fair to say everyone at the Scottish FA and in this team has stood behind them from the start. What we have seen there is horrendous.

“For 90 minutes or 120 minutes, we need to separate our thoughts. We want to get to the World Cup, we have to be ready for the challenge and emotion Ukraine will provide.”

Around 2,000 Ukrainian fans are expected to be at the stadium to watch the match and many have been helped by groups such as the Association of Ukrainians in Great Britain (AUGB).

Yevgen Chub is the treasurer of the organization in Glasgow and he has assisted many Ukrainians with the logistics of getting tickets.

He says the game promises to be an emotional affair, win or lose.

“Ukraine shows that is still exists, it’s not something that someone wants to erase. The nation still exists and the nation is still fighting everywhere,” he told CNN Sport from outside Hampden Park.

“Everyone is trying to support Ukraine and the Ukrainian people.” 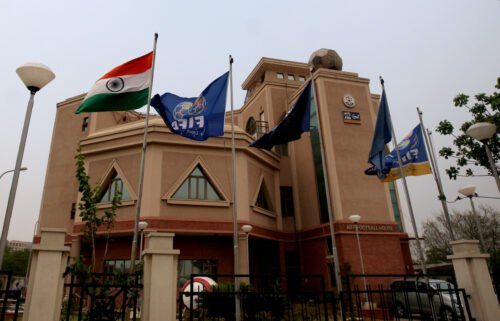 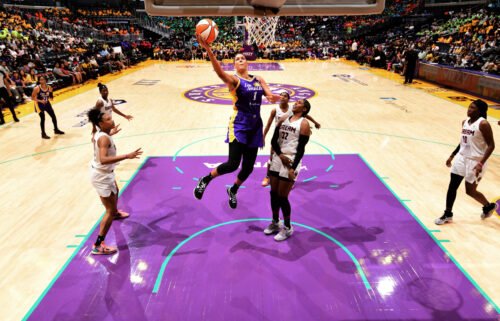