INDEPENDENCE, Missouri (KCTV) — At least 300 people stood outside the Independence Police Department Thursday night. Many didn’t even know Officer Blaize Madrid-Evans, who was killed Wednesday, shot by a man he and his field training officer were trying to contact about a warrant.

They bowed their heads in prayer and held each other tight. There were few words, just faces abounding, illuminated by candles.

It was civilians who organized the vigil, but there were first responders in the crowd from more than a dozen state, county and city agencies on both sides of the state line: police, fire and EMS.

It was particularly painful for the staff at AMR, where Madrid-Evans worked as an EMT before becoming a police officer.

People laid candles beside the flowers that now sit beneath the Independence Fallen Officers Memorial. A group of teenaged girls had tears streaming down their faces.

“My dad was a responding officer on that call,” one of them, 17-year-old Lindsey Barker, said.

She came with friends and her grandma, Connie Barker. As the mother of an Independence police officer, when she heard about an officer shot and critically wounded, her heart raced and her stomach lurched.

“I got on the phone immediately and he answered immediately. Thank God. I don’t know what I would have done if he hadn’t,” said Connie Barker.

That’s the knowing that comes from the family of every officer — even if they don’t know the pain of a family that’s lost someone in the line of duty.

“My mother was 11 when he was killed in the line of duty in Independence. So this means a lot to our family,” said Greg McGhee.

McGhee is the activities director at William Chrisman High School. He was hesitant to share his connection when we approached him at random, because he didn’t want to take away who the night was really about.

His grandpa’s name, Lt. David Kraxner, is on the memorial wall — killed Oct 31st, 1966. His is just one of five names there, soon to be six.

“My heart just breaks for the family,” said Lindsey Barker. “I’m just thankful that my dad came out of it safe. And I know he was pretty shaken up about it. He’s not here tonight, but I just wanted to come out here and show support for my family and the police department.”

“It’s just been a terrible few days here,” said McGhee, “and I pray for all the officers who are out here on the streets.”

Officer Madrid-Evans was just 22 years old. He graduated from the police academy in July of this year and was still in the field training program. His family was at the vigil, standing silently among the crowd, and no doubt felt the love. 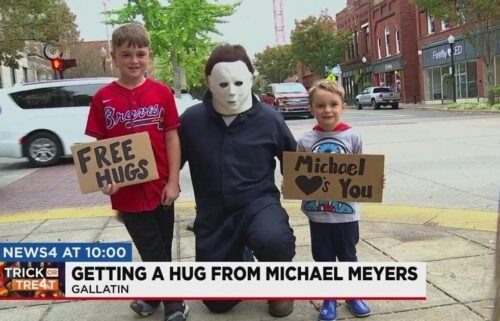