If you’re planning to travel to India, here’s what you’ll need to know and expect if you want to visit during the coronavirus pandemic.

India swiftly closed its borders at the start of the pandemic, banning all scheduled international flights in March 2020.

Tourists are still banned, though those traveling on other visas from the continents of Europe, Africa and South America are now allowed, along with travelers from other destinations who meet strict criteria.

The question is: What isn’t on offer in India? This vast country has an astonishing range of landscapes, architecture, cultures and religions. Most first-timers stick to the “golden triangle” of Delhi, Agra and Jaipur, but other big hitters for newbies include the Kerala waterways, beaches of Goa and Mumbai, one of the world’s most thrilling cities.

Tourists are not yet permitted. Only Indian nationals, those moving to the country as residents, and those from certain countries who qualify for visas other than tourist visas may go. From the United States, United Kingdom and Canada, things are more restricted — only diplomats and those listed in a government memorandum may travel. However other visa holders from the European Union, Africa and South America may travel — as long as it is not on a tourist visa.

Regular international flights are suspended, although Vande Bharat Mission repatriation flights are operating, as are “air transport bubbles” from various countries around the world — although only those meeting the visa criteria for entry are allowed on these flights.

All arrivals are screened. Anyone showing symptoms will be taken to a medical facility. Land borders are closed, other than for returning India nationals.

As of February 22, all travelers must upload a self-declaration form on the Air Suvidha Portal, as well as a negative PCR test taken within 72 hours of the journey. They must also declare via the portal that they will quarantine at home for 14 days on arrival.

Travelers arriving from the UK or Middle East must fill in the same form, declaring their travel history of the past 14 days, and any connecting flights on arrival in India, as well as provide a negative PCR test. They will be segregated in-flight or while disembarking and must undergo a further PCR test on arrival at their own expense. They must stay at the airport until they get their results.

Transit passengers coming from these countries who test negative can catch their connecting flights, but must quarantine at home for seven days, and take a test at the end of the quarantine period.

India has seen nearly 13.7 million cases and 171,000 deaths as of April 13. On the first anniversary of its initial lockdown, India recorded 50,000 new cases — a record since November. And on April 11, a record of nearly 153,000 new infections were announced — the highest single-day rise in infections since the beginning of the pandemic, according to a CNN tally of figures from the Indian Ministry of Health.

Maharashtra state — of which Mumbai is the capital — appears to be at the center of things, registering more than 51,000 infections in one day on April 12. Delhi reported over 1,500 cases on March 25, and 10,000 on April 11, with Delhi Chief Minister Arvind Kejriwal warning of a “fourth wave.” There are said to be nearly 800 variants present in the country.

Over 104 million doses of vaccination have been delivered so far — with nearly 13 million, or 0.96% of the population, fully vaccinated. Maharashtra, Odisha and Punjab state health officials have reported vaccine shortages.

India imposed one of the world’s strictest lockdowns in March 2020, though restrictions have been eased as the months have gone on. Weddings and religious events are now allowed to take place, and domestic travel is allowed. However, different states are imposing different regulations. Maharashtra — where Mumbai is located — has announced an evening curfew from 28 March. Malls must close from 8 p.m. to 7 a.m. and there is no standing allowed on trains. On April 13, authorities announced that they were discussing plans for an imminent lockdown.

Celebrants of Holi and Easter were allowed to celebrate, though urged to adhere to social distancing guidelines.

We’ve compiled lists of what we think are the best places to visit, the most beautiful temples, and India’s best things to eat, by region. If you’re looking for post-pandemic island life, here are some suggestions. Or read about the incredible history of Indian stepwells. And finally, read a round-up of India’s most famous buildings. 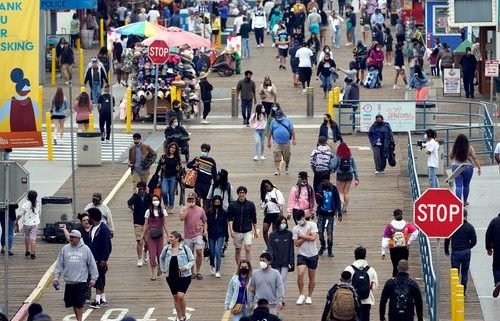