POCATELLO, Idaho (KIFI/KIDK) - One local public official was the subject of a recent car burglary.

"Somebody came in and stole the Police Chief's car," said Chubbuck Mayor Kevin England. "Now, that's an unmarked car, so good chance whoever took it didn't realize that it was a police vehicle."

Mayor England says that car burglaries have been trending in the area.

Mayor England also says the Chubbuck Police are cautioning everyone to watch out for their belongings and lockup their empty cars.

"That’s the message that our police have been trying to get out to people," England said. "To know that there are some untoward things happening out there and to take precautions to protect your property.

Both the Chubbuck and Pocatello Police Departments are currently investigating the theft and other car burglaries that have happened in the neighborhood.

"Many times when these kinds of things happen, the perpetrator can’t keep it to themselves and shares it with a friend or a neighbor or relatives," England said. "So, if somebody has some information, we would appreciate them letting us know."

You should contact Chubbuck police at 208-237-7172 with any new information regarding the investigation. 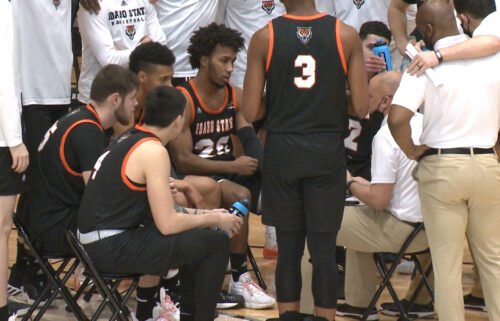