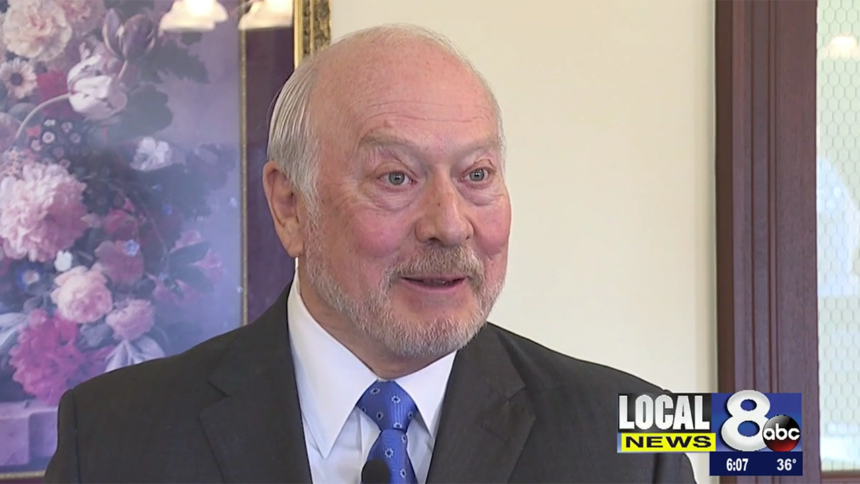 BOISE, Idaho (AP) - Idaho Billionaire Frank VanderSloot is lobbying legislators to back legislation requiring doctors and medical facilities to make their patient bills timely and clear - and limit how much attorneys can get paid for helping collect medical debt under certain circumstances.

VanderSloot is the founder of wellness shopping club Melaleuca. Lawmakers have nicknamed the effort "Frank's bill."

He traveled from his home in Idaho Falls to Boise on Wednesday to seek support for the measure, officially named the Idaho Patient Act, and lawmakers plan to introduce it next week.

VanderSloot is most incensed at lawyers who get involved in medical debt collection after one of his employees was charged thousands of dollars in legal fees for a medical bill of less than $300. The bill seeks to cap medical collection debt fees at $350 for people who do not contest their bills and $750 for those who do.

Medical debt collection in Idaho "has become, in my opinion, a racket," VanderSloot said. "Their whole idea is to run up that bill and to get it as big as they can. There are some loopholes in Idaho law that allows them to do that."

Republican Rep. Jason Monks, the Legislature's influential assistant majority leader, said the bill will be introduced in a House committee next week. Republican Sen. Kelly Anthon, an attorney and the majority caucus chair, said he plans to sponsor the bill on the Senate side.

"We're not interested at all in having people avoid their medical bills," said VanderSloot. "We want doctors to be paid. What we're interested in is when these attorneys try to turn a medical bill into an attorney bill."

VanderSloot, 71, grew up in northern Idaho. His father was a railroad worker and his mother cooked on a wood stove and scavenged for vegetables and fruit behind grocery stores. He converted to The Church of Jesus Christ of Latter-day Saints at age 16, did his mission in the Netherlands, and graduated from Brigham Young University in Utah.

Melaleuca grew under his guidance to some 2,000 employees and made him rich. He's started other companies, is a Republican cause donor and decided to take on medical debt collectors after he said one of his workers and his company endured a debt collection nightmare several years ago.

The worker was billed $294 for medical care but never received the bill or payment warnings by a collection agency, VanderSloot said. Then the agency tried to get Melaleuca to garnish the wages of the worker, who VanderSloot has not identified, for payment of the bill.

But the agency provided the wrong Social Security number for the worker and Melaleuca would not give it to the agency, citing privacy concerns of the worker.

The agency and a law firm took VanderSloot's company to court, trying to force Melaleuca to pay the bill plus collection and legal fees of more than $5,000. Melaleuca won the case.

VanderSloot said he subsequently discovered that there are hundreds of similar cases involving the collection company, Medical Recovery Services, which is managed by Bryan Zollinger, a Republican lawmaker from Idaho Falls. Bryan Smith, a lawyer active in the Republican party, has acted as the company's lawyer.

Zollinger said he disputes VanderSloot's accusations that the company has used unethical collection methods and won't support the legislation that would hurt the company.

"I think there are solutions that you could run that wouldn't create additional bureaucracy and regulation, and wouldn't be so costly to the medical profession," he said, adding medical professionals would pass the cost of unpaid fees to other patients.

VanderSloot said Medical Recovery Services is filing about 2,400 cases a year, mainly in the communities in a three-county area that has helped him prosper. So he created a legal defense fund and contributed $500,000 to help people he felt were being targeted. When that money ran out, he contributed another $500,000.

He's now paying the legal fees of more than 200 people, only one of whom is an employee. He said more than 90% of the legal cases involve Medical Recovery Services. Some 50 of the cases are heading for court, and VanderSloot is keen to see what kind of evidence turns up involving debt collection.

"I think what we have come up with is a reasonable solution to some of the problems that are plaguing people in Idaho," said Monks, the lawmaker planning to introduce the legislation on the House side.

Anthon, the Senate-side lawmaker sponsoring the bill, said nearly every family in Idaho has had to deal with the problem the Idaho Patient Act would address.

"Because the process is so convoluted, you actually have families taken to court before they even have a chance to sort out what they owe and what their insurance is going to cover," he said.

VanderSloot's said his decision to get involved stems from his innate dislike of seeing "people get bullied."

"I don't want to be somebody who stands by and lets stuff happen to people that's wrong," he said. "And I think what's happening to these people is wrong."