IDAHO FALLS, Idaho (KIFI) - The hardship of winter moves some well-meaning people to set out food for deer. But truth is, they’re wild animals adapted to winter, and feeding them can quickly create a variety of problems significantly affecting their survival, Idaho Fish and Game says.

Despite good intentions, supplemental feeding of mule deer often harms them, frequently resulting in their death. Although some mule deer have adapted to live in our urban environments and feed on non-native foods, this change in behavior doesn’t necessarily mean it is a healthy environment for them.

Idaho Fish and Game receives numerous reports of sick deer in the town of Salmon and in many other urban and suburban areas of the state, especially during winter and early spring. Many residents report these animals as possible Chronic Wasting Disease. However, CWD has only been detected in Unit 14 roughly between Whitebird and Riggins.

The occurrence of sick deer in towns has been a long-standing issue common among urban deer populations. The most frequent cause of illness in urban deer is related to their nutrition.

A mule deer’s digestive system is similar to other ruminants, which have four stomach compartments, instead of a single stomach. Deer are dependent on bacteria to break down their food. As their diets change throughout the year, so do the bacteria, adjusting to differences in diet composition and the quality of the forage.

This change in bacterial composition can take several weeks, as deer are poorly adapted to sudden changes in diet. As a consequence, even foods with high nutritional value may become difficult or impossible to digest, and animals will often starve to death with full stomachs.

Fawns are particularly susceptible to dying from sudden changes in diet. They are still in a state of rapid body growth and have little to no body fat reserves to compensate for the added stress. When their stomach microbiota is disrupted by unnatural foods, they are forced to try and maintain their energy levels by digesting internal fat. Fawns do not have extensive fat reserves, this means they begin to digest their bone marrow and eventually will suffer organ failure.

Fish and Game personnel euthanizes or disposes of dozens of dead deer that are the direct cause of supplemental feeding within city limits every year. Examinations of the carcasses find that many of these sick deer have full stomachs. However, the bone marrow condition is degraded to the point where it is a clear yellow or red, indicating severe nutritional deficiency, compared to healthy pink or white colored marrow. The animal’s system is not adapted to can increase stomach acidity, cause ulcers and quickly damage the stomach beyond the point of recovery.

Although urban deer can bring enjoyment for some, it comes with many challenges and conflicts that can be exacerbated by feeding. Some well-intentioned people think that if they supply a different food source, it will prevent animals from damaging their ornamental plants. Unfortunately, supplemental feeding usually encourages wildlife to congregate in higher numbers, resulting in greater damage and a whole web of problems for people, their pets and sadly, the animals themselves. 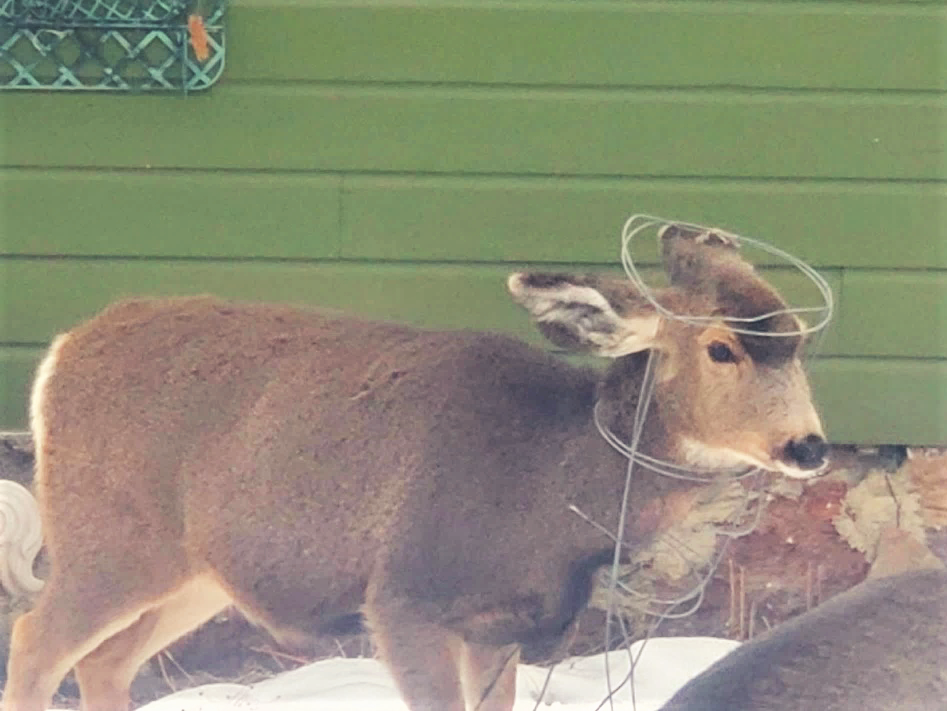 Mule deer in Challis looking for a food handout got caught in a tomato cage instead. Fish and Game has captured seven deer and elk to remove tomato cages within the last year between Stanley, Challis and Salmon.

Feeding a few deer can very quickly lead to many more looking for handouts, congregating unnaturally high numbers in small areas, which increases the chances of diseases spreading among the population. Malnourished animals and crowding stress creates conditions ideal for serious disease outbreaks, which is a serious concern. 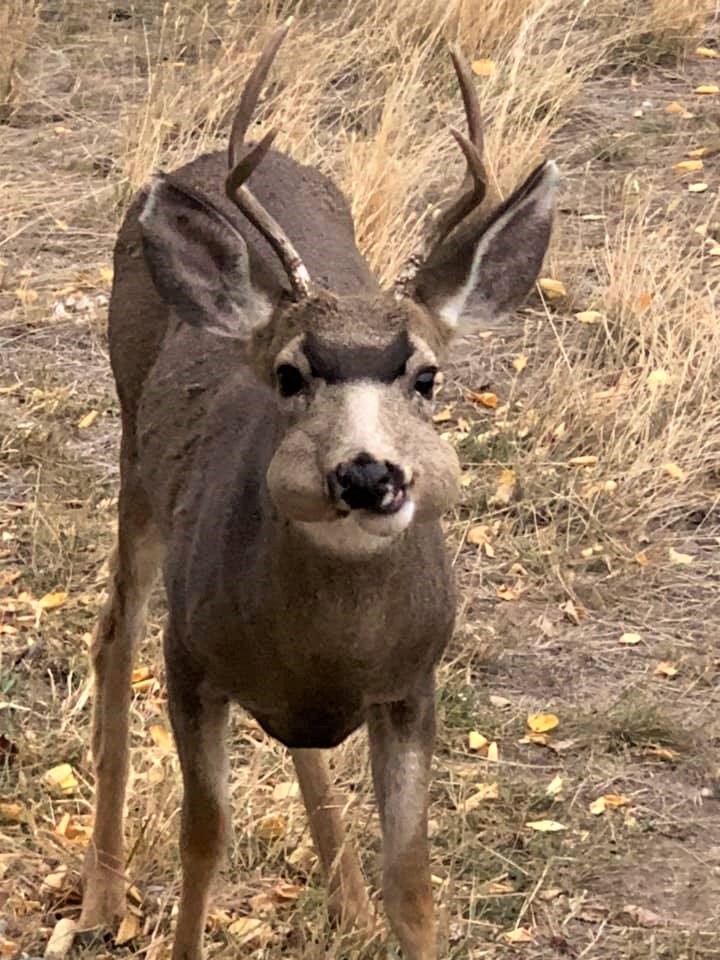 Mule deer in Salmon city limits with Food Impaction, a condition caused by arterial worms which settle in the carotid artery and restrict blood flow to the facial muscles. This reduces the animal’s ability to properly chew food, which builds up in the cheek and jaw pockets instead of being swallowed. Fish and Game discourages feeding deer to reduce the transmission of several diseases including food impaction.

Feeding deer can also attract more dangerous animals that homeowners and their household pets don’t want around. Mountain lions are common in the forests of Idaho, and are sometimes attracted to cities’ confines where deer and elk congregate when fed.

Additionally, concentrating big game in communities and neighborhoods can lead to increased numbers of wildlife-vehicle collisions. Obviously, accidently hitting a deer or a much larger elk can cause serious personal injury or death, not to mention vehicle damage and injury or death to the animal. More importantly, fed deer may lose their fear of humans, which can lead to injuries and sometimes death to the animal, pets and even people. While deer may look harmless, people need to remember that they are wild animals and can be unpredictable.

There are a wide range of opinions regarding deer in urban areas, however, most will agree that healthy wildlife is important. Consideration of all factors involved is critically important to the health of our deer herds and their impacts on our community.

To prevent sick deer, the most important action the public can take is not allow deer the opportunity to forage on unhealthy foods. Supplemental feed like bird seed, alfalfa cubes, deer blocks, livestock feed, or even a recent report of potato chips are very unhealthy for deer. However, all it takes is one household in a neighborhood to feed wild animals, such as deer, elk, wild turkeys, which negates the positive efforts of others who are making a conscious choice to not feed wildlife.

The simple truth is good intentions aren't always good for wildlife. Feeding deer can make them partially tame, which detracts from their value as truly wild animals. Deer are adapted to be able to digest certain foods, the healthiest foods come from their natural environment. In the long run, wildlife is usually better off without human interference, whether intentional or not.