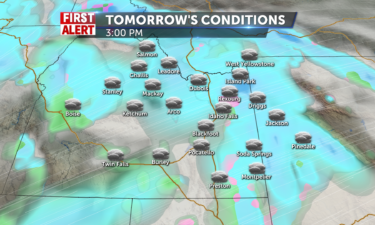 On a sticky September Saturday, Linwood Dillard and Shakeya Mervin work tirelessly on two of their regulars. Both barbers and business partners, Dillard and Mervin bring haircuts to the residents of Harlem, New York seven days a week on a reassembled white minibus on Lenox Avenue.

And while the essence of a traditional barbershop remains present, the familiar sounds of buzzing clippers and lively conversations are drowned out on the mobile barbershop. In addition to the bustle of Harlem, the barbers compete to be heard over the loud hum of the generator that powers the bus.

Many people in the beauty industry have found themselves tasked with getting creative to remain in business as the public continues to grapple with the fear of reinfections and emerging variants of Covid-19. Even as New York City has officially reopened, barbers and hairstylists fear a future where their regulars may no longer need their services.

Dillard, also known as “Da Barber God” by his customers for his sharp razor and clipper skills, isn’t worried though. “People trust me because everyone around here knows us,” he said. “We could be out and about and people are like, ‘Hey you’re the barbers from the bus.’ So, even during the pandemic my clients never left.”

Dillard and Mervin began cutting hair together almost nine years ago at Designz & Lignz Barbershop, a storefront that is now a seafood restaurant called Catch & Grill. After leaving the shop in 2017, when gentrification of the area caused rent to skyrocket from $3,500 to $8,500, the duo reunited during the pandemic, propelling what Dillard calls Harlem’s first mobile barbershop. A concept he launched six months before the pandemic that now sits near their old barbershop on 128th street and Lenox Avenue.

“Harlem is my home, and this is my location,” he said. “I stayed in this spot during the pandemic, and parking here is kind of like, ‘Hey, I’m back.'”

The beauty industry, which relies heavily on in-person services, has been devastated by the effects of Covid-19. According to the Bureau of Labor Statistics, between February and April last year, the number of jobs at employment-based salons plunged by 84%. Even as the industry began to gradually recover in April, the Professional Beauty Association reports that only 93,000 people nationwide were on payroll at employment-based salons — down from 569,000 in February. The report reflects the fewest number of salon jobs in well over five decades.

At the Oscar Blandi Salon on Madison Avenue, in Midtown Manhattan, Whitney Hunt found herself unemployed for nearly five months. She struggled to pay her rent and buy food. The stylist went from averaging five to 10 clients a day before the pandemic to being lucky if she had three clients in a week.

“When we first reopened, it was a great two weeks because nobody had haircuts,” she said. “But after that, it was crickets.”

On June 15, former New York Governor Andrew Cuomo announced that Covid-19 restrictions were lifted as 70% of adult New Yorkers had received the first dose of the vaccine. The restraints removed from industries like barbershops and hair salons were limits on restrictions such as social gatherings, cleaning and disinfection, social distancing, and contact tracing. Still, many beauty industry professionals struggle to recover from pandemic shutdowns.

A month later, Bobit Beauty Health and Wellness reported that compared to sales before the shutdown, 41% of US salons’ first quarter service sales significantly decreased, and 23% of sales were slightly lower than before the pandemic.

“As a hairdresser, we all felt abandoned,” Hunt said. “We were disposable, and we were all kind of shocked. It was like we get it, there’s no need for us.”

Though Hunt received unemployment benefits, she said it wasn’t enough. Like Dillard and Mervin with the mobile bus, she, too, had to find inventive ways to keep working. So, unable to work in the salon, she took her most prized possession — a case of scissors worth $2,000 — and hit the road. “I did hair in tents, garages and in backyards because I wasn’t allowed in clients’ homes,” she said. “I started doing editorial work (styling hair on shoots) which is really what saved me because it gave me an opportunity to do projects outside of the salon.”

Despite the reopening of some salons across the city, Hunt still struggles to get clients in her chair. “I have some clients that refuse to come back into the salon, they’re just downright scared,” she said. “I can’t convince them to come in, and I can’t sell them on any (of the) safety (precautions we’re taking). Certain people, after this, will not step foot in the salon.”

Meanwhile, Dillard and Mervin experienced the exact opposite. Due to the passenger capacity of his minibus, they can only service one to two clients. But during the pandemic, the mobile barbershop received more walk-ins than ever before. “We were kind of like superheroes,” Mervin said. “We are!” Dillard interjected, laughing. “That’s why they call us the barber gods.”

Cutting hair on a bus he purchased for $2,500 has not come without its fair share of bumpy rides. After being open for less than a year before the pandemic, Dillard knew that shutting his doors would be financially detrimental.

“My bus broke down last March, and I had to get the engine fixed, I got it back three days before everything shut down,” he remembered. “I had already missed three weeks of money, and I knew that I couldn’t just close.”

So Dillard continued to cut his loyal client’s hair, only allowing one customer on the bus at a time. When things slowly began to reopen, he had no problem getting more customers on the bus. “Every day somebody walks by, and the first thing they say is ‘Oh, wow. That’s a barbershop?'” he said. “So, because of the idea alone, it’s already an attention grabber.”

Dillard believes the bus’s increasing success, especially in the past year is down to people being afraid to return to a traditional salon setting. Mervin insisted it’s also about creativity and how they make their customers feel when they step onto the bus.

“With everything opening back up, people could be anywhere, inside of a shop with central air conditioning, but they’re here with us, that says something… Like Phillip, he’s been coming to me since I first started cutting hair,” she said, using her barber duster to gently whisk freshly cut hair from her client’s shoulders onto the floor.

Edinio Phillip, one of Mervin’s most faithful clients, started getting his hair cut by her in 2012 when he would visit New York City on weekends. After moving to the city permanently in 2015, she became his go-to barber. The two were recently reunited by chance.

“I couldn’t get my haircut in the pandemic from April to June of 2020, and that was just terrible,” Phillip said. “When I just happened to be walking past this bus and saw her, I was like, ‘wow.'”

It’s all about the bigger picture for Dillard and Mervin. “What we’re doing right now is big,” Dillard said. “It’s evolutionary.”

“This is [about] representation,” Mervin said. “It’s not only about barbers. Nail salon technicians that were out of work are just like us and could benefit from this idea. All of the services that people pay for are essential, and it’s just about adapting.”

For Hunt, being out of work for so long because of the pandemic was an eye-opening experience. It forced her to question how essential her services were in the lives of others. “During these times, if people don’t leave their house, they’re darn sure not coming into a salon,” she said. “I kept thinking maybe I should have stayed in college like my parents told me to.”

Dillard never questioned just how essential his mobile barbershop was and has become in light of growing pandemic uncertainties. “We’re barbers, we don’t have another nine to five,” he said. “We don’t have another income. So, when we wake up, the only thing we know is cutting hair. Nothing is going to stop that.”