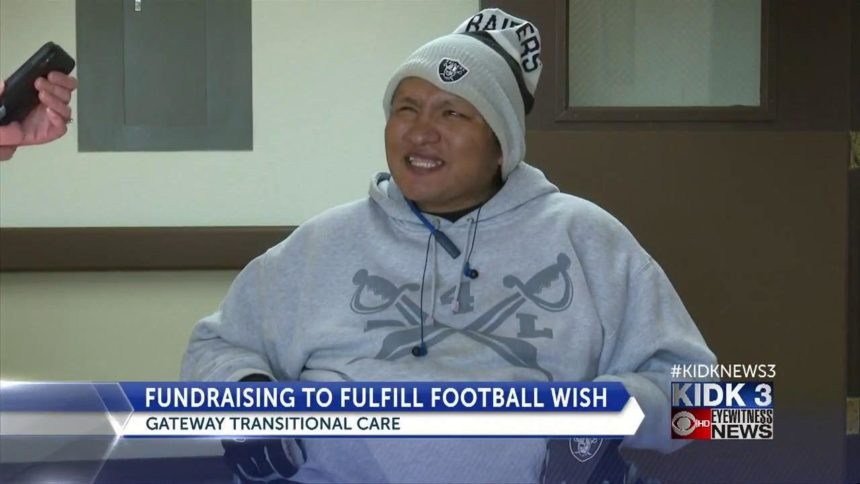 POCATELLO, Idaho (KIFI/KIDK) - As part of a continued effort to send die-hard Raiders fan Charles Buck to a game in Oakland, the ELF Project is hosting a watch party Thursday at Gateway Transitional Care as the Raiders host the Los Angeles Chargers.

Buck, who is suffering from kidney failure and not eligible to be on a donor list, has been a Raiders fan his entire life despite never having seen them play in person.

At Thursday's watch party, the local little league Pocatello Raiders will be in attendance.

Even though they aren't the "real team," coach Tracy Moore says he hopes the kids put a smile on Charles' face.

"I’m hoping that, you know, if these kids can do that and just brighten his day, one day, that’ll be a success."

Estimates to send Buck and a representative from Gateway to California are around $5,000. Luckily, the JRM Foundation has already donated $1,000.

“So, we are looking to generate about $4,000 through this community event to help get here to where he needs to go," ELF Project board member Dominee Hall said.

Hall knows it would take a Hail Mary to hit that mark on Thursday, but said the group is willing to do whatever it takes to get Charles to The Coliseum on Nov. 17.

In addition to going to the Bengals-Raiders game, Buck is hoping that he can actually meet the team.

Hall says community members with connections to the team have helped set up a meet and greet with the team's mascot, Raider Rusher, but it's still unclear if Charles will get to meet any players or coaches.

"That is still something we are working on," Hall said. "The team does know that we're coming. I mean, they do know the story. We've been able to connect those dots through the help of the community."

But before any of that can happen, the group is hoping the community comes out to join them to raise the money they need to make it possible.