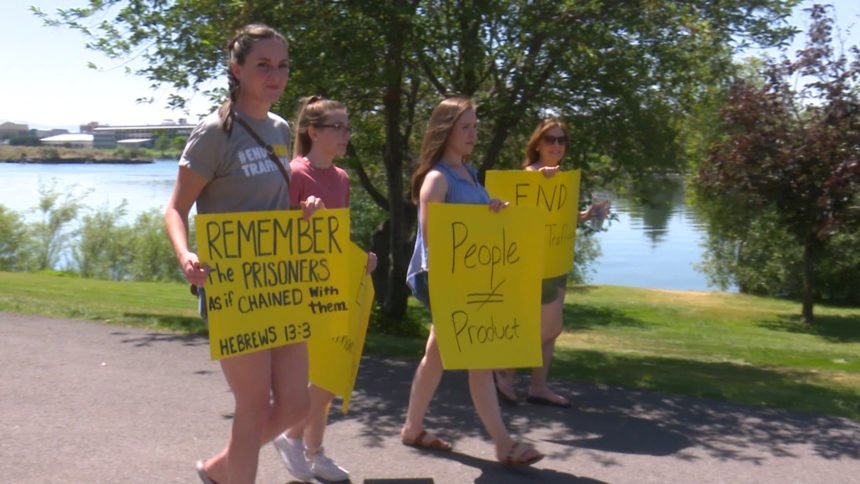 IDAHO FALLS, Idaho (KIFI/KIDK) - Thursday is World Day Against Trafficking in Humans. Community members marched along the Green Belt this afternoon to raise awareness about sex slavery and to remind people that it’s happening everywhere.

Many children are at risk for becoming victims of sexual exploitation in the United States. In 2020 alone, Operation Underground Railroad has seen the numbers increase by the millions due to the pandemic.

O.U.R. works to rescue children trapped in sex slavery and spread awareness to lower the number exploited each year. The Rise Up For Children Campaign involves 30 communities across the US raising their voices to spread awareness about human trafficking.

O.U.R Rexburg Team Leader Chase Kimball is passionate about making sure children and the plights of human trafficking are not overlooked.

“A lot’s going on in the world right now, especially in our country,” Kimball said. “And unfortunately, the children have been forgotten. And we need to take the time to make sure they’re not forgotten.”

Kimball says there are always ways to become involved and Operation Underground Railroad is a way to shine a light into the dark world of human trafficking and child sex slavery. He says talking about human trafficking and educating people about it happening not only in our country, but every country around the globe is the best way to drive out the darkness.

“It’s everywhere," Kimball said. "The United States is the number one consumer of child pornography. And we are the number one hotspot for sex slavery and human trafficking. It comes from us. We are the reason why it’s happening. It’s happening everywhere so we can’t take all the blame, but we take a good chunk of it. And we’re the number one reason why these children are forced to do the things that they are...we think that it may be a third world county, we think that it’s not close to home. Well guess again, it’s here.”

According to O.U.R., right now, it's estimated that there are 2 million children worldwide involved some way in sex trafficking and slavery. Every 30 seconds a person is sold into sex slavery. O.U.R. has 30 demonstration leaders (and growing) in respective communities around the United States that plan to Rise Up on July 30. The goal of these demonstrations is to call on governments to make a commitment to continue giving resources that will help fight against traffickers and online pedophiles.

Tim Ballard, the founder of O.U.R., used to work for the CIA with a unit that helped rescue sexually exploited children. His efforts while using his role in government as a platform were stunted by laws and jurisdictions governing foreign involvement. O.U.R allowed him to go into other countries and empower overseas law enforcement to infiltrate sex trafficking rings that the United States lacked federal authority to oversee. Partly due to O.U.R’s help, foreign law enforcement agencies have been able to apprehend pedofiles and free enslaved children within their respective countries. To date, O.U.R. has rescued more than 3,900 survivors and assisted in the arrest of 2,000 traffickers.

You can view more information HERE.

***UPDATE: Demonstrations grew to encompass 150 cities across the country on Thursday.