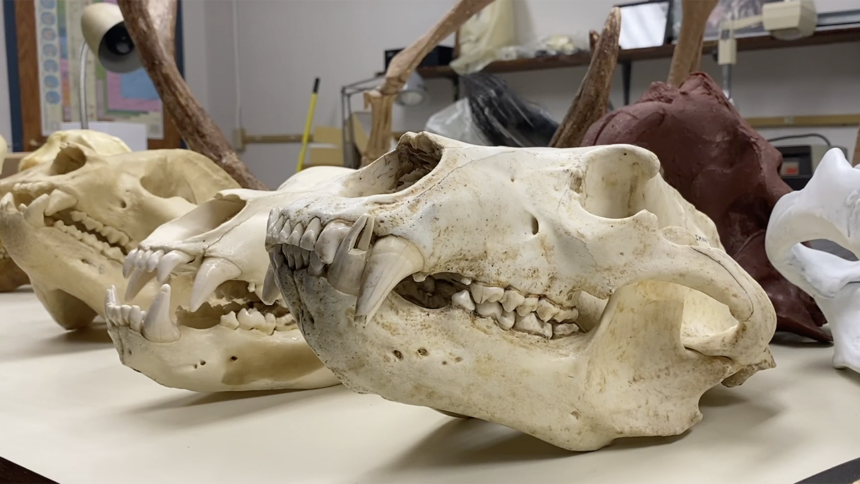 POCATELLO, Idaho (KIFI/KIDK) - The Idaho Museum of Natural History is getting ready for an exhibit that will feature some pretty spooky skulls just in time for Halloween.

Linda Larsen tells us the museum is admitting they have some skeletons in their closet.

"We all got a skull under here and you have never seen all the skulls of the animals before and when you see them all together it's kind of a mind blower, quite literally," said Leif Tapanila, Idaho Museum of Natural History Director.

The exhibit "Skulls, Everybody's Got One" features 3D printed skulls, fossil skulls and real skulls. For the 3D printed ones, they used cat scans to make exact replicas.

Jessie Pruitt, the Manager of Idaho Virtualization Laboratory, has really been using his head on this one he was the model for the human skull he says sometimes the work can be humorous.

"I spent the day the other day sanding my skull down trying to get it polished it was reminding me of a scene from the movie predator where he was sanding down human skulls I was just this feels a little weird doing my own," Pruitt said.

Scientists can tell by looking at similarities and differences of skulls how the animal has adapted, what they eat, how they avoid being eaten and how they respond to their environment. Not to mention being able to see where our own species fits into the evolutionary picture

"It's all about skulls," Pruitt said. "It's looking at how our skull relates to the skulls that other animals have. It also shows some of the really crazy adaptations that skulls go through. So we've got animals from hammerheads to giant elk and things like that just to show the range and how adaptive the skull is to different environments and things like that.

To see how your skull measures up, you can catch the exhibit starting on Sept. 19.

The museum has procedures to limit the number of guests at one time and they regularly sanitize interactive spaces. Face coverings are required.