Another coastal storm is intensifying in the East, making for a wet and icy weekend ahead.

“It looks like this storm will hit the criteria of a bomb cyclone — a rapidly strengthening storm that drops 24 millibars (units of pressure) in 24 hours,” CNN meteorologist Dave Hennen said.

But, Hennen adds, this storm is what’s called an inland runner, but over land instead of the ocean. This storm track from over the Carolinas up through interior New England means the major northeast cities will see rain instead of snow.

Flood watches are out for portions of coastal New England, including Boston, where minor flooding could occur around rivers and creeks.

Heavy rain late Friday night through Saturday morning will result in widespread rainfall totals of 1.5 to 2.5 inches across the region, said the National Weather Service in Boston. Localized higher amounts of 3 to 3.5 inches are possible.

Even though most of the Northeast will see rain, a few areas could see substantial snow.
“The best chance for snow will be from late Saturday into Sunday morning for cities like Cleveland and Buffalo, into western New York,” said Hennen. Some areas could pick up more than 6 inches of snow.

Freezing rain fell Friday morning across the higher elevations of the Appalachian mountains in the Carolinas, causing a light glazing of ice.

And more is forecast for the higher elevations across interior New England.

During this time, travel will be difficult. Ice accumulation could bring down trees and power lines, resulting in possible power outages. 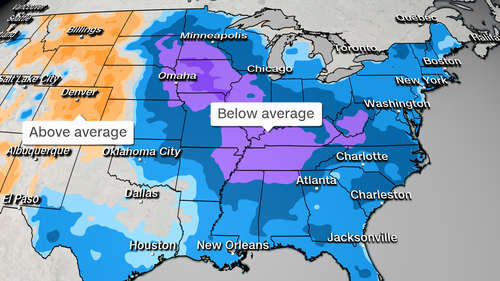