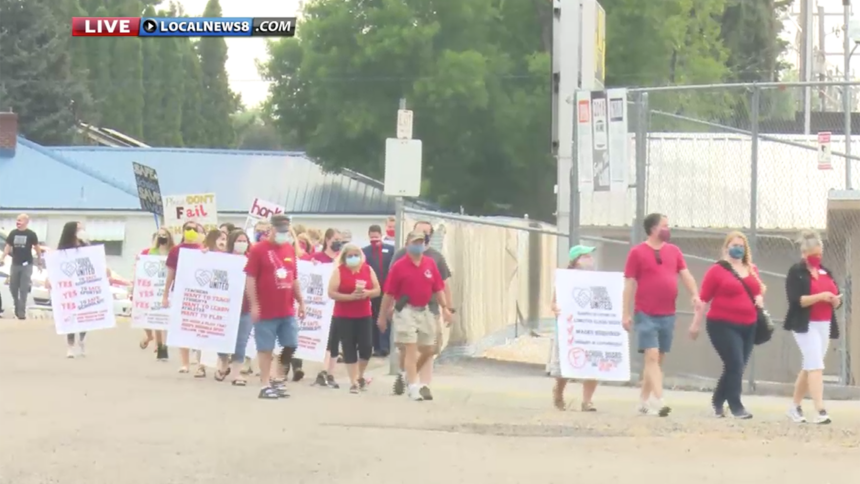 IDAHO FALLS, Idaho (KIFI/KIDK) - Teachers, parents, and students gathered outside of the Idaho Falls School District 91 office today for a rally protesting the way the district plans to begin the school year on Monday.

"What we're asking for and supporting is for schools to open…schools to open safely," said Idaho Falls Education Association president, Angela Gillman.

Gillman says a reopening committee made up of teachers, administrators, and parents, met with the district all summer long to come up with a re-opening plan made up of three phases that everyone was comfortable with.

She says the organization was taken aback last week when the district announced it would be starting with a new phase that the reopening committee had never heard about.

"That was what we expectedly assumed would happen, is to choose one of those phases that we had all worked so collaboratively on and that the board had approved that plan in July," Gillman said.

The new "Blue phase" that the district will be opening with allows students to return to in-person classes Monday through Thursday with at-home online classes on Friday.

Idaho Falls High School sophomore Claire Yoo says even students are concerned, "We feel as though student safety has been overlooked with the blue phase and we feel as though the board of trustees has not done a very good job in their decision making."

President of the Idaho Education Association Layne McInelly says the way the district went about the changes is the issue.

"We know there probably will be changes, this is a global pandemic that we've never dealt with before, but we have to have those changes go through the proper channels, we can't just have school boards automatically changing," McInelly said.

We reached out to the district for a comment about why they made the decision to add the blue phase without discussing it with the committee and did not get a response.

The Idaho Falls board of trustees is holding a special meeting on Thursday night at 7pm to only discuss modifying the 2020-21 school calendar.

You can watch a livestream below.