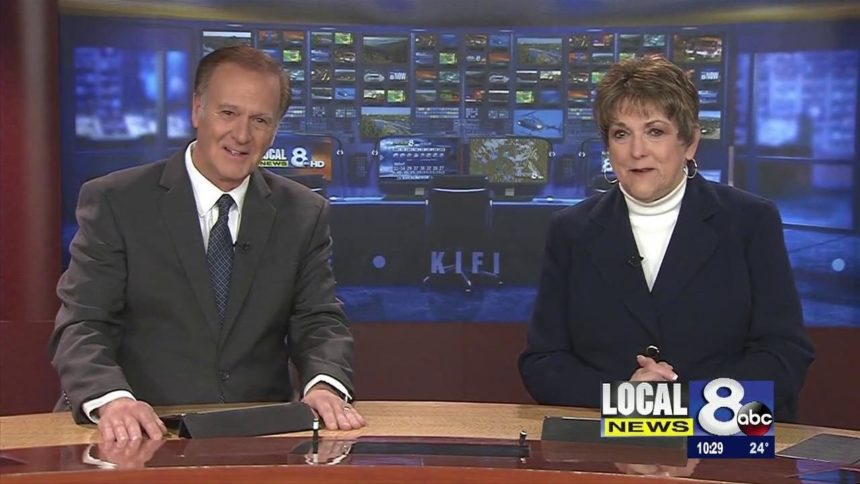 IDAHO FALLS, Idaho (KIFI) - Jay Hildebrandt, award-winning anchor and reporter for KIFI-Local News 8 at 5, 6, & 10 p.m., has announced that he is retiring this month after 35 years.

The announcement came at the end of Friday's 10 p.m. Newscast. Karole Honas also showed some video clips of memorable moments they had as co-anchors over the past 29 years.

The public will have an opportunity to bid Jay farewell at the Willard Arts Center on November 27, 2019 from 7 to 9 p.m.

Jay joined the Team back in 1984. Before that, he grew up in Milwaukee, Wisconsin and got his communications degree from Brigham Young University.

Jay's first job after college was in Twin Falls, Idaho, at KMVT-TV where he anchored for two years. Then, he moved to Fort Wayne, Indiana, where he anchored at WKJG-TV for four years before deciding to move back to Idaho. A career spanning 42 years in broadcasting.

Jay has been involved in a number of special projects for the newscasts over the years.

For more than 3 decades, Jay produced weekly Wednesday’s Child reports. Each week, a child living in a temporary foster home, who needed an adoptive family was featured. Many viewers were touched by the children’s stories, and hundreds of them were adopted due to Wednesday’s Child.

Hundreds of outstanding high school seniors were also featured by Jay in his weekly Distinguished Student series of reports.

Along with his Local News 8 job, Jay keeps busy a couple mornings a week as an adjunct instructor at Brigham Young University Idaho teaching public speaking and broadcast performance classes, which he finds extremely rewarding.

During his years in Idaho Falls, Jay has been involved in a number of local community activities. He has served on the Governor's Children's Trust Fund Board, the Region VII Health and Welfare Advisory Board, and the Safe Place Advisory Board.

"It’s been an incredibly rewarding career," Jay said. "I feel very fortunate to have had a job that I love and that gave me the opportunity to work with so many wonderful people in the community and with colleagues that have become my best friends. People ask me what I am going to do after I retire. With five kids and 15 grandchildren scattered around the west I think I will find enough to do to keep busy."