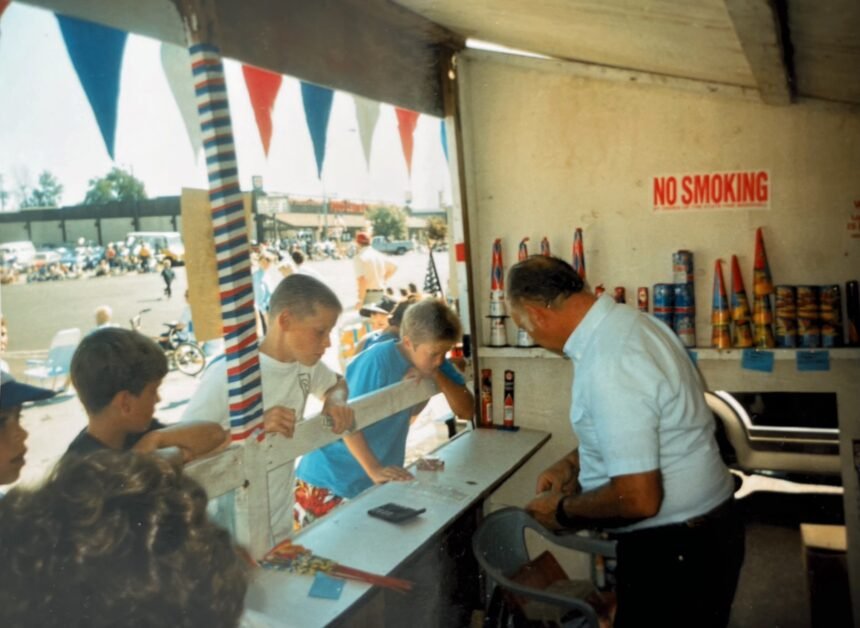 REXBURG, Idaho (KIFI) - What once started as a way for his dad to help earn a little more money during the summer months has turned into a full blown family summer business and tradition. Though that tradition has evolved as the fireworks business has continued to change. For Dave Webster and his family, operating firework stands is just something that you do during the summer.

Webster says it all started one summer as his parents Lynn and Shirlee Webster were hoping to help provide for their family during the summer break from the schools, as his dad was an educator.

"It was LNS fireworks on Main Street in the Broulim's parking lot, and they started because my dad as a teacher didn't make a lot of money. So it was a supplemental income during the summertime, and they really wanted us to know how to count money. Back and learn those skills, that we'll use through our life. And we've kept it going ever since," Webster said.

Webster says fireworks and the stand itself has changed since his first run in the stand with his dad during the 70s.

"We were able to sell bottle rockets and firecrackers and some of those one's that we can't sell today."

Much of that change was due to Idaho's Safe and Sane law which made many of those types of fireworks illegal for home use.

During the early days of the Webster's fireworks stand, Webster says, "Many kids come up and they'd be checking the prices, buying things with pennies and and just able to most the time for the first six days or so, it was always little kids. On their bikes and and they'd go from stand to stand and, and you'd have a whole row of bicycles out in front."

Something Webster says he misses, "nowadays you don't get as many kids and they're not checking the prices. And people come in, buy things on credit cards, and buy more packs and bigger purchases." He says part of why he misses that is due to the fun he and his siblings would have as they helped kids, "we used to just helping the kids count the money...help them know how to count the money and add up how much, it cost for this and that."

Webster says running the fireworks stand every summer has really helped him appreciate the fun of the holiday.

"Its no about greed. It's just about getting together with family, having fun and celebrating."

He says they kept the tradition alive for many reasons. One of them is "to help people celebrate. And we have our fireworks friends, the people that come every year, they're looking for the Webster's and they know we're going to help them celebrate in the fourth, the best we can. Give them, the biggest bang that we can for the buck."

He says even the fireworks they sell have changed over the years, after a match made in heaven, the Websters have partnered with TNT Fireworks.

"One wonderful thing about TNT Fireworks is they are all about safety and we can't even get, the Aerials and the illegal ones from our suppliers. Because they want to make sure that we're obeying the laws and not doing anything questionable so it's such a good company to work with."

While in previous years, the Websters have struggled getting a ton of fireworks this year they were able to have more than enough for anyone wanting to make large booms in their neighborhood.

"Actually, our supplies this year were a lot better than last year. Last year was a lot harder for us because were stuck in shipping, but a lot of those that product came in this year. And so we don't have the supply problems that we've had in the past. We have a great selection."

Webster says while challenges have come along the way.

"I think it early nineties or so, we got a call from the sheriff on a Sunday afternoon, because of our fireworks stand. It had been blown into the Main Street. So my dad and us kids had to come in and pick up the fireworks stand for Main Street and put back together so we'd be able to sell them on Monday."

Webster operates three TNT firework stands all of which are in Rexburg. One is where the original was and continues to be in the Rexburg Broulim's parking lot facing Main Street. He also operates to one in the Albertson's parking lot on N 2nd E and the one in the Walmart Parking lot.