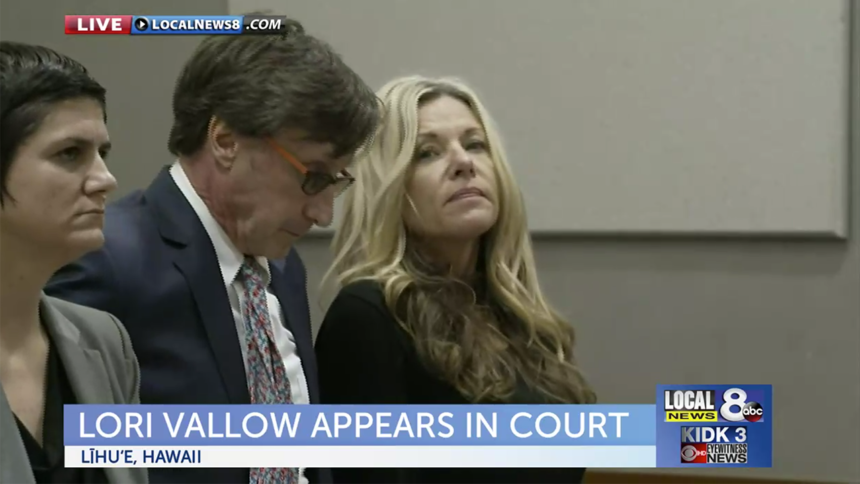 LĪHU‘E (KIFI/KIDK) – Lori Vallow was in court Friday afternoon in Kaua‘i Fifth Circuit Court in Līhu‘e, Hawaii. You can watch that below.

Vallow's attorney couldn't get her $5 million bail lowered. Defense attorney Daniel Hempey said police knew she was on Kauai and had a lawyer who's offered to turn her in.

She faces a hearing Monday, March 2 on extradition to Idaho.

Should Vallow bailout, she is to surrender any passports to police.

Vallow was arrested on a warrant issued by Madison County and is currently being held at KPD Cellblock on a $5 million bail.

Her two children, 17-year-old Tylee Ryan and 7-year-old Joshua “J.J.” Vallow have been missing since September.

Vallow failed to comply with a court order to produce her children before authorities on Jan. 30 in Madison County.

She has since been charged with two felony counts of desertion and nonsupport of dependent children. She was also charged with arrests and seizures – resisting or obstructing officers, criminal solicitation to commit a crime, and contempt of court – willful disobedience of court process or order.

“First of all, we wish to thank the public for the massive outpouring of concern regarding this case,” said Kaua‘i Chief of Police Todd G. Raybuck. “We also want to thank everyone for their patience while investigators worked diligently to comprehensively gather everything they needed in order to obtain this arrest warrant.”

KPD subsequently received an affidavit requesting assistance in securing a search warrant, which was obtained by the 5th Circuit of the District Court in Hawai‘i, in connection to Rexburg PD’s ongoing investigation into the missing children.

On Jan. 25, Kaua‘i police presented an Idaho order to Vallow to produce her children before authorities in Madison County.

On Jan. 26, KPD served a search warrant related to Rexburg PD’s investigation on the rented vehicle occupied by Vallow and Daybell, as well as the condo they were renting in Princeville.

Vallow will now attend a hearing on Kaua‘i – date is yet to be determined – where she will have an opportunity to waive or fight her extradition to Idaho. Once in Idaho, she will face her criminal charges.

The children were last seen in Idaho, and there is no indication that they are on Kaua‘i. There are currently no criminal charges against Vallow on Kaua‘i.

Questions directly related to the charges should be made to the Rexburg PD, as they remain the primary investigative agency.

Madison County Prosecuting Attorney, Rob H. Wood says the complaint filed by his office in Rexburg, alleges that Vallow abandoned her two minor children, delayed law enforcement’s attempts to locate her children, and encouraged another individual to delay law enforcement’s attempts to locate her children. Additionally, the State alleges that Vallow disobeyed a court order to physically produce her children to authorities in Idaho. The maximum sentence on each count of desertion of a child under Idaho Code 18-401(1) is 14 years in prison.