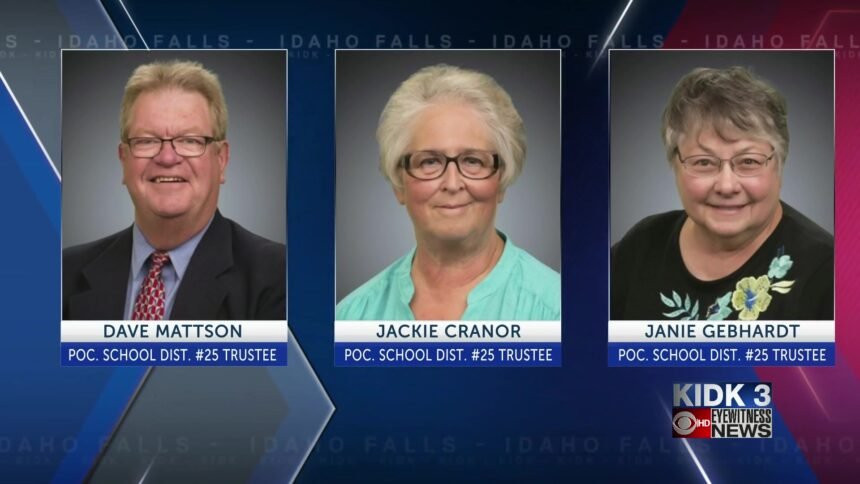 POCATELLO, Idaho (KIFI) - School District 25, like most other school districts in the country, has faced a year of difficult decisions thanks to the coronavirus pandemic. Some of those recent choices made by the Board of Trustees has brought the threat of a recall.

The Board’s decision to move students into a part-time in-person learning schedule, coupled with past boundary issues and the choice to retire the Pocatello Indians mascot, led Jesse Ward and other community members to lead an effort to recall three Board members, Jackie Cranor, Janie Gerbhardt, and Chairman Dave Mattson.

Despite the Board's recent decision to return secondary students to a modified traditional (five days a week, in-person learning) schedule for the final trimester, the effort to recall three Board members is still underway.

Ward has a daughter attending Irving Middle School, who he said is excited to return to five days a week of in-person learning.

“It was really hard on her. And I think as a byproduct of that, it was also really hard for my kids who are in elementary school to understand why they weren’t being allowed to be home three days a week with a day of online learning,” Ward said.

When Ward took his concerns to the Board with other community members in September, he said he felt like working with the Board was futile.

“It was at that point that we understood we were not going to have a dialogue or conversation with these people, we were actually looked down on, and nothing was going to happen unless we took action to recall the Board members,” Ward said.

Gebhardt, one of the three Board members up for recall, said she and her constituents have been receptive to input from everyone.

"I've heard them say, 'You didn't listen to us.' Well, there are over 12,000 students in this school district. Listening to everybody and trying to make good decisions that are for the health and safety of all students didn't make some people happy. You're not going to make everyone happy all the time and that's just the way it is," Gebhardt said.

Gebhardt has been on the Board of Trustees for 14 years and serves zone 2. Reflecting back on the Board's notable decisions of the year, she stands by her votes, saying the Board did the best they could for all students.

"Listening to some of the things that are going on across the country, at least our students were able to be in school a good portion of the time. It may not be ideal, but we're in a pandemic, and it's not exactly normal times," Gebhardt said.

Ward and his constituents created a Political Action Committee, called Values for Education, which he registered with the Idaho Secretary of State’s office. In December, according to public records, the PAC collected $540 from two donors.

The funds will be used to garner attention for the upcoming special election on March 9, by purchasing radio ad time, signs and other forms of advertising, Ward said. None of the monies donated will go to reimbursing the members of the PAC for their work on the recall effort, Ward said.

“I think that regardless of where people land on this, that everybody go out and vote in this special election,” Ward said.

The Special Election is Tuesday, March 9. The Bannock County Elections Office will be open for early walk-in voting starting Feb. 22, from 9 a.m. to 4:30 p.m. The last day to Early Vote will be March 5. Elections Manager Julie Hancock confirmed the office is ordering extra ballots for the zones Gebhardt, Mattson, and Cranor serve.